Warren Bennis in his classic book, Why Leaders Can’t Lead: The Unconscious Conspiracy Continues, discussed the forces that impact leaders and diminished their ability to lead. Bennis knew that the environment in which a leader operates impacts his or her ability to lead. A great leader in one setting may be totally ineffective in a different setting. Many of us have found that true in our own careers,

As Bennis considered the inability of leaders to lead, he saw multiple causes for this phenomenon. One set of those causes was a series of trends occurring in society. While he did go into depth around these societal trends in his book, he realized that collectively they would have a disruptive impact on leadership; he referred to them as ominous societal trends. It should be pointed out that the interaction between multiple societal trends creates a web of influence that “in toto”, diminishes the leader’s capability to lead. Each trend, taken as a single issue, may not see significant or even noteworthy. In fact some will even disagree that the issue discussed is a problem. However, the combination and interplay between these forces, some subtle and some not, is what is lethal to leadership.

Barack Obama campaigned in 2007 on the slogan “Hope and Change”. He advocated that the nation needed to change to a different kind of country. In the past, Obama’s vision of a different America would have been soundly defeated but Obama, either consciously or unconsciously, sensed that the philosophy of Americans had changed. Once ascribing to the Puritan Work Ethic, the majority of Americans had changed to a new belief system, the Psychology of Entitlement. That belief system held to the fact that because of guaranteed rights provided by the Constitution (and interpreted by the individual) and that “someone was responsible to ensure those rights were protected. Originally that someone was government. In just a few short years, that someone has shifted to business and to their leaders.

Additionally America is becoming less religious. The removal of moral absolutes and prayer from the schools has had an impact on individual’s religious beliefs. According to the Pew Research Center’s two Religious Landscape Studies – conducted in 2007 and 2014 –

“we also see consistent evidence that the “nones” are becoming less religious. For example, the share of religious “nones” who say they believe in God, while still a majority, has fallen from 70% to 61% over that seven-year period. Only 27% of “nones” are absolutely certain about God’s existence, down from 36% in 2007. And fully a third of religiously unaffiliated Americans (33%) now say they do not believe in God, up 11 percentage points over that time”.

Additionally the philosophy of situational ethics has taken its toll as any action can be justified in the name of the “situation” Therefore, individuals long for anyone who demonstrates consistent integrity and trustworthiness in practicing what they espouse but find no one

The Beliefs That Deify Leadership

Belief 1. Leadership Can Fulfill All Needs

Belief 2. Everyone Is Entitled to Great Leadership

This is a sign of our day. Fueled by Gallup’s and other think tank company’s research showing that the great majority of leaders are mediocre, people wonder why they are forced to tolerate that mediocrity. This unnecessary stress is the fault of business. The wrong people are being promoted!

There was once a day when people learned from situations they encountered. Failures, disappointments, and tough situations are now to be avoided. In fact one is entitled not to have these annoyances or difficulties placed on them. Just as parents protect their children from the evil intentions of those in authority (schools administrators, law enforcement, etc.), today those same parents want to be protected from any situation that is not “great leadership”. Businesses and organizations “owe us” great leaders and wise decisions.

Implications Of Deifying Leadership
There are four implications of deifying leadership that have the net impact of making it difficult for leaders to lead. 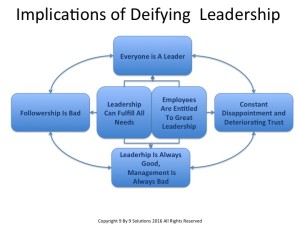 Why Leaders Can’t Lead #1:. Leadership Is Always Good, Management Is Always Bad
It is not uncommon to read articles in which the term leaders or leadership are used in a uniformly positive sense and the terms managers or management are universally negative. Besides demonstrating a complete lack of understanding of the two functions (not people, functions), this fallacy has one underlying assumption: people are so competent and self-motivated that no one needs to be Leaders never make mistakes; they never err and they also do what is right. They always care for people first even if it means sacrificing the mission. Management, however, is bad. People do not need to be managed, only processes, systems and things. As a result, anyone in a position of authority who does something that is not liked is a manager but not a leader. Since everyone will eventually err, that reinforces the belief that leaders are scarce, maybe non-existent and unworthy to be followed. Therefore no leader can succeed over the long-term.

This belief is reinforced daily, Management books, articles and posts (yes, especially posts) provide us the correct answers to leadership problems. These solutions are clear to everyone except those who happen to hold leadership positions. Management consultants and trainers who desperately attempt to lure business their way by espousing sole insights into the holy grail of leadership fuel this belief. As people read these simple “how-to” pieces, they look at their own manager/leaders and wonder why they do not live up to these common sense actions so perfectly articulated by those on the sideline.

Question to ponder: If great leadership is defined as perfectly conforming to a “book answer”, how can any individual leader ever succeed?

Why Leaders Can’t Lead #2: Followership is bad
Followers are partners and collaborators in the success of organizational goals. It is not the opposite of leadership; rather it is the place where capabilities are developed. Yet today followership is demeaned.

In The Power of Followership, by Robert Kelly, he observed that most people, no matter their rank or title, spend more time as followers than as leaders. More time is spent reporting to people rather than leading or supervising.

The “everyone is a leader” myth, which has been blindly accepted as truth, waters down the significance and uniqueness of leadership. It keeps people from finding out what they actually are great at doing. If everyone on the team is told they are in charge and expect to be treated as if they are, chaos would reign.

This implication is having a significant impact on the current skill gap. Instead of billions of dollars spend trying to develop leaders, those funds, focused on basic cores skills that are not being developed in the educational system, would have a significant impact on productivity, profitability and ultimately the number of leaders being developed.

This is perhaps one of the most serious implications for without followers, there can be no leaders.

Question to ponder: Where have all the followers gone?

Why Leaders Can’t Lead #3: Everyone Is A Leader

At the same time we deify leadership we lower the standards so all can qualify. Fueled by years of political correctness and fairness, we now ensure that everyone can be trained and considered for leadership positions. And if you do not happen to have a formal position of leadership, do not fret. Be a leader where you are. Your opinion and ideas are just as worthy as that of your leader, for all are leaders.

In 2000, the Kellogg Foundation published a report on the status of leadership on university campuses in North America. Their conclusion? Every student has the potential to be a leader and Leadership skills must be taught to everyone..

Driven by the unfortunate and false definition that influence is leadership, the great majority of people now embrace the belief that since everyone at some point in their lives influences others, for good or bad, then everyone is a leader. The truth is all leaders definitely influence others but not all influencers are leaders. Leadership requires much more than influence, both in terms of character and skills and not everyone qualifies.

Since everyone is a leader that also positions every person to critique those who do lead. With few facts and limited understanding of the situation, coffee rooms and LinkedIn posts are filled with those espousing the right way to handle every situation – their way! As a result, the every person is a leader has degraded the professionalism and position le true leadership.

At the same time society beats its collective chest over the lack of genuine leadership, organizations rush to push people through leadership training.

Our just-released 2012 Bersin & Associates Leadership Development Factbook® shows that U.S. companies have increased leadership development spending 14 percent over 2011 levels to an estimated $13.6 billion in 2012. According to Bersin, investment in leadership development grew an additional 10 percent since 2015
http://www.bersin.com/blog/post/Boosted-Spend-on-Leadership-Development-e28093-The-Facts-and-Figures.aspx

An acquaintance of mine that loved his steaks “Pittsburgh rare”, seared on the outside and blood-red on the inside. In essence this is our current approach to leadership development. We expose multitudes of people to academic leadership content in the mistaken hope that a great leader will emerge. At the same time we leave the core raw and undercooked and that core is character out of which true leadership grows.

Questions to ponder. First, how can great leadership be so scarce if everyone can be a leader and most are being trained to do so? Does accepting a formal position turn a once noble and informal leader into a power-hungry despot? Second, how many leaders can one organization tolerate, each with their own vision and direction? Unless every person knows how to follow, alignment can never occur.

Research surveys reflect the decreasing level of trust in leadership in every organization. One only has to read Edelman’s annual research to see that every institution, and by association their leadership, is lightly regarded and considered undeserving of trust. Gallup reports that only 30% of American managers/leaders are great, far less than what is required.

The end result of the mad rush to train everyone in leadership is that we develop more educated critics. Fueled by articles and research studies describing the failures and inadequacies of those in leadership, every leader’s actions are “weighed in the balances and found wanting”.

Outcome of Deifying Leadership
At the same time we deify the concept of leadership we categorically those who hold those positions as unworthy. Why is this?
The question brings us back to the core. Without the development of moral and ethical character beginning in early childhood, thinking we can develop leaders later in life is a pipedream. We are not looking for leadership as much as we are looking for character.

We deify leadership because it is increasingly scarce and we realize what great leadership could accomplish. Yet we are not developing leadership talent because we are working on the wrong core issues. It is not leadership skills we are lacking but ethical and moral character. Instead of addressing the core issue and building pools of talented leaders, we are developing pools of critics. The problem is that the critics, once placed in leadership positions, make the same, or worse mistakes, than those they replaced.

MAKE A DIFFERENCE WHERE YOU ARE! "The world will little note, nor long remember what we say here, but it can never forget what they did here. " A. Lincoln

Read my new article about an important national issue: http://bizcatalyst360.com/the-decline-of-entrepreneurship-are-we-hearing-the-death-rattles-of-business/