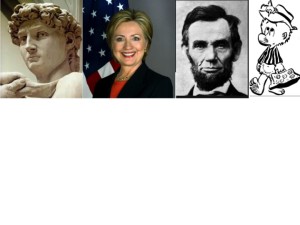 What Would You Do?
There once was a powerful leader who did not believe laws, rules or policies applied to him. They applied to the average employee but not to someone with his position, wisdom and power. His significant accomplishments alone were reason enough for special treatment. When his violations were uncovered, this leader used different strategies to address the annoyances: deny the action took place; justify the behavior because the rule or law made no sense; destroy any evidence that might be incriminating; blame the people who are investigating as witch hunters; or show how other in the same position did the same thing (and even worse). Sometimes he used all the strategies and most of the time he got what he wanted.
What would you tell this leader?

King David
In ancient Israel King Davis committed the worst of crimes. He committed adultery with a soldier’s wife and to cover his action he had the soldier killed. As he lived with the cover-up of his offense, the prophet Nathan came to him and told him a story that paralleled the crime he had just committed. After King David heard the story he became angry over the actions of the perpetrator and proposed to take harsh action against that person. (He obviously did not recognize his behaviors in the analogy). At that point, Nathan told King David, “You are that man.” As a result of that confrontation, King David took personal responsibility for his actions; the same kind of personal responsibility and accountability we advocate in our leaders (and ourselves) today. Good leaders err but good leaders also acknowledge and address their failures. This is one true indicator that they are qualified to lead.

Hillary Clinton
Recently we have observed a situation that has become all too common. E-mails of the former Secretary of State were destroyed from her personal server. The problem is not so much the infraction; these kinds of behaviors happen (much too frequently). The real the indictment of her ability to lead concerns Hillary’s reaction to the infraction.

The fact that she had a personal server in the first place is a problem. (Avoid this problem and she would not be in the current situation). Since using private e-mail was expressly prohibited to other employees in the State Department (some were even fired for violating the policy), we have a situation where a leader she is above the policies that apply to others. This one leadership attitude would draw the universal condemnation of LinkedIn readers on the basis of arrogance, elitism, and poor leadership.

Now her situation has worsened. E-mails on the server have been destroyed. (Hasn’t this strategy been used before in other federal agencies?) The action is a clear violation of ethics, agency policy and probably law. More importantly it conveys something is being hidden. But destroying evidence is allowable in the minds of the situational ethicist because there is a greater good to be accomplished. The country needs a woman president and Hillary provides the best option to achieve that goal. How can Hillary be elected President if the truth is found out? Therefore, the deletion of her e-mails, regardless of law or ethics, is justified to achieve the greater result. Besides, the rule never should have applied to someone so talented and skilled in the first place. (Try that rationale the next time a policeman pulls you over for speeding!)

Hillary’s strategy to avoid this issue will be successful because there are many people who support and defend her and who believe the end justifies the means. Of course, if it had been someone less favored than Hillary who took these actions, the same behaviors would be loudly condemned and protested. Therein lies one of the biggest threats to leaders and our nation.

Resolution of ethical issues should not start with the comment “It depends on who it is.” That is a major reason why leadership is in such disrepute.

The situational ethics rationale that allows Hillary to believe that the greater good justifies deleting her e-mails is the same rationale that her supporters use in defending her. It is not easy to say that a person we support and believe is wrong. It is not easy to say to people that there are absolutes and what they are doing is wrong. But until we do these types of actions will continue. For you see, the solution is not to find better leaders but first to find better followers.

When good people will not stand up united and agree that wrong is wrong, we will become a house divided. Abraham Lincoln warned us about that situation. Or as the cartoon character, Pogo, wisely warned us, “We have met the enemy, and he is us.” It is time to send all our leaders a message that enough is enough.

Copyright 2015 9 By 9 Solutions All Rights Reserved

"Trust is the lubrication that makes it possible for organizations to work." --Warren Bennis

If I were to enter the workforce today, there is no way I would be considered or hired for the jobs in which I started my career. After graduating from...