One of the most important and visible sources of credibility is how a person adds value on the job. Being masterful at one craft lends credibility to a person since they not only know what to do but follow it up with action. While this credibility arises out of the work a person does, it does not naturally carry over from one profession or even one company to another. It must be earned and re-earned every time a person changes positions. As a result some people may have high credibility in one situation, but lack credibility in a different company or job.

Just like personal credibility (part 2 of this series), character and integrity underlie professional credibility. Strong professional credibility can be destroyed if a person is dishonest in their dealings or if they continually violate other essential (and expected) character traits. Underlying the sources of professional credibility are three foundation elements that build character and integrity: the values and beliefs the person holds, the application (putting into practice) of those values and beliefs; and, the litmus test of credibility – “do others appreciate and are attracted to those beliefs and values and the way they are practiced?” (For a full explanation of this foundation see Part 1 of this series). A person can faithfully practice a set of values while others reject those values and practices. In this case the person not only does not earn credibility but also may be reviled despite their consistent practice. This is becoming more of an issue for leaders. Today many are measured by and expected to conform to the norms of a group rather than be allowed to hold diverse views. The desire to homogenize all values is one of the major reasons groups are becoming unleadable. 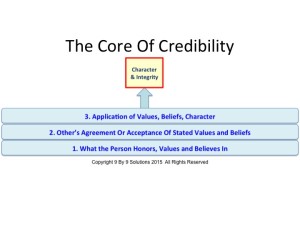 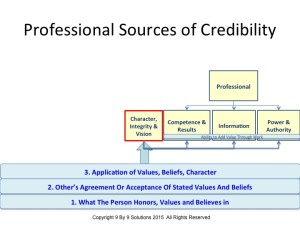 Competence and results is a critical credibility area that immediately draws the attention of senior leadership, peers and followers. This credibility is derived from a person’s ability to achieve significant results in a way that demonstrates competence of the person.

Senior leadership is concerned with the ability to execute against expectations and execution is a skill that is in high demand. (According to Ram Charan one of the major reason senior leaders fail is their inability to execute and produce results). Therefore when senior leadership sees a person who has the ability to get things done, it immediately establishes credibility around the major reason all positions exist – to produce results. Obviously, this is a two edged sword. Results are critical and credibility cannot be earned or kept if a person cannot deliver results. However sustained credibility does not result when short-term results are achieved at the expense of long term positioning or at the expense of staff and customers (although this may not be uncovered for a length of time).

These three scenarios represent the way results and competence produce credibility. These three scenarios provide insight into the “what have you done for me lately” philosophy. Credibility arises from a combination of sustained high performance as well as significant breakthroughs. The ability to sustain or repeat both of those contributions on an on-going basis is critical to sustained competence.

There are three different scenarios in which competence earns credibility. 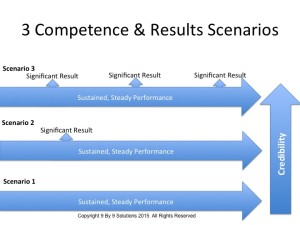 The first scenario is sustained high level of results over an extended period of time. In this scenario daily, monthly and annual performance always surpasses expectations. Goals are exceeded regularly but there are no major breakthroughs that catch one’s eye or draws attention to the sustained competent performance. Thus credibility is earned quickly based on results but over time but the danger is that sustained high performance becomes expected and possibly viewed as average.

The second scenario of competence is sustained high performance but with a major breakthrough, innovation or accomplishment sometime during that period. This person is able to maintain their credibility for an extended period of time but they are primarily known for one significant accomplishment in their career. I am reminded of a person who created a unique product for a company. Based on this high selling product, the person was promoted, made partner and was viewed as a significant contributor in the organization. Over time it became obvious there were not going to be additional significant contributions. When the person’s on-going performance became average he was discharged from the company.

Staff also assesses a person’s competence and results to determine if he or she is credible. Interestingly enough high performance can be a reason that people lose credibility in the eyes of others (especially if staff feel they did not have equal opportunity to demonstrate what they could do). To establish credibility staff looks for collegial competence; they assess how one person treats, involves and shares with others; they assess how a person shares the recognition they receive from achieving performance goals. Important elements of competence to a staff member include inclusion in meaningful work, personal growth and learning as a result of that inclusion, status in the eyes of the person so that he or she can influence decisions and direction, and the potential positive impact to one’s career as a result of being associated with the credible person.

If the person is a leader, underlying all these other considerations is the concept of fairness and equity. Do all persons get the opportunity to work on significant opportunities? Are all people judged or evaluated consistently? Credibility for a leader can quickly be destroyed when there is an allegation of favoritism. 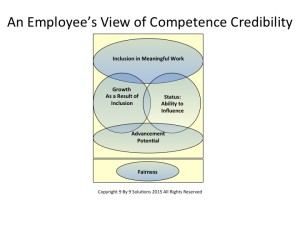 This highlights a very important point about professional credibility as it relates to competence and results. Either senior leadership or employees may view a person as extremely competent and credible while the other group may not see that person as competent at all. This one issue is at the heart of disgruntlement over who is promoted in organizations.

There is no question that in the business world, competence and results is a major contributor to credibility. A person who is not viewed as competent in their job is hard pressed to earn significant credibility through any other source.

Information is a valuable commodity. This area of credibility stems from three key areas: the knowledge a person has or has access to; the experience the person has in using that knowledge in a significant way; and, the ability of the person to apply their knowledge to unique situations in order to produce innovative solutions. 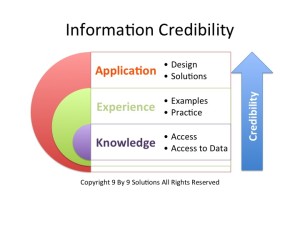 In today’s society possessing technical knowledge of the job is not as important as it once was. It is important to have technical knowledge but simply possessing the knowledge is not a significant driver of credibility. Access to information has become easier and more commonplace. In many instances staff even have higher levels of technical knowledge than the leader. This means the personal level of technical knowledge is not as valuable as it was when certain people were the sole repositories of significant organizational knowledge. (Of course, there are still people who hoard valuable information as form of organizational power and control). Of much higher value is a person’s ability to access information and to facilitate the application of knowledge to fit unique solutions. It is often this ability to apply what one knows to unique situations that produces the innovations and breakthroughs mentioned in the results and competence section above. In reality this is where true thought leadership occurs.

The ability to reward or punish has always been a form of credibility. Whether feared or beloved, a person who can follow up on promises or threats has credibility because they have the power or authority to do what they say they will do.

French and Raven theorized as early as 1959 that power had five forms. These forms ranged from authoritative command and control based on legitimate power (I outrank you so you have to do what I say) to coercive power (suffer the consequences). Today most of these forms of power are in disrepute.
Today credibility arises from the collaborative use of power to make things happen. This use of power or authority includes the ability to raise attention to focus on key issues; to bring groups together around those issues; and to lead those groups to produce significant results around those key issues. These issues may range from significant organizational issues to specific concerns that one person wants addressed. In each case credibility grows when the issue is addressed. If authority and power are used, well the person will be seen as fair and equitable (one of the core underlying character traits of credibility). If power is used poorly, the person will be seen as playing favorites (or worse, using power to further their own self-interests).

Copyright 9 By 9 Solutions All Rights Reserved

Normal Reaction or Being a Jerk? In Lisa Eadicicco’s recent article, “How Steve Jobs Reacted When A Top Apple Executive Left For A Competing Company”, http://www.businessinsider.com/steve-jobs-reaction-when-jon-rubinstein-quit-2015-3, she describes Job’s disbelief...

Persuasive Communication: A Powerful Tool In The Leader’s Toolkit

“What we have here is a failure to communicate.” The Captain, Road Prison 36 from Cool Hand Luke Leadership Communication Leadership communication is an interesting topic. First we know that...