According to Jim Clifton, President and CEO of Gallup Corporation,

“A staggering 75% of the American public believe corruption is “widespread” in the U.S. government. Not incompetence, but corruption. This alarming figure has held steady since 2010, up from 66% in 2009.”

There has never been a time that credibility and trustworthiness of leaders has been a more important topic.

In parts 1 through 3 of these series on credibility, we have explored the sources from which credibility grows. The complete model is shown below. As discussed in the three previous posts there are two major credibility areas, personal and professional, with six different source of credibility. The underlying and driving force beneath these six areas is the credibility stemming from a person’s character. 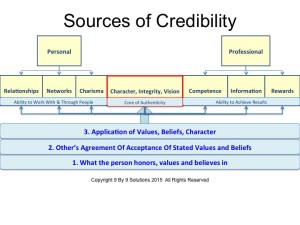 While gaining credibility is important, maintaining it is equally, and possibly more, important and difficult. Eight observations about leadership credibility are offered below.

A. Credibility is the Magnet That Causes People To Follow
Leadership credibility is critical. People may be forced to report to another person but willingness to follow cannot be mandated. People choose to follow another person because that person has been assessed and has been found worthy. Therefore credibility becomes the single most important facet a leader possesses for without it, there will be no followers.

B. Credibility is Defined By One Thing And One Thing Only

Credibility is assessed against expectations that come from one of two sources; what others feel a leader should be or do or and what a leader states he or she will do.

People have expectations (often unstated and ill defined) of leaders and how they should behave. In a large group of people those expectations will vary to the point that it is impossible for a leader to fulfill them all. Therefore proactive leaders address this lack of clarity by framing expectations. They do this by defining the principles by which they operate so that people can gauge what happens against what they were told to expect. Leaders also enhance their credibility through communication that keeps people’s expectations up to date.

It goes without saying that credibility often begins with the person’s words – what they say they honor, value and believe in as well as the articulation of what they want to achieve. The litmus test of credibility is not in words, however, but in deeds.

When a leader’s actual behavior (even if is it the right thing to do) does not align with follower’s expected behavior, credibility is damaged. Over time all leaders eventually disappoint others. They may even make enemies with people who then allege the leader is untrustworthy because of their action, or lack of it. In some instances these people will have been previous supporters Thus a leader should understand that they will never be able to achieve universal credibility or respect. Attempting to do so by behaving in the way others want him or her to is a quick path to inconsistency and unmet expectations.

D. Credibility is Highly Impacted By Character But In Ways Never Seen Before

One of the main contemporary problems with credibility is the deterioration of trust that we currently see in leadership across all institutions. One of the major causes of this decline stems from the underlying philosophy of situational ethics that permeates much of our education and society today. Because character is taught as situational, trustworthiness deteriorates of those who lead. Leaders may rationalize and even justify their behavior to do what is expedient, easy or self-serving in a given situation. No surprise, this is what situational ethics taught them to do. This flexibility in values may gain the leader the title of clever but it will never gain them the reputation of being credible and therefore trustworthy.

Character is essential to credibility. If and when a leader’s character flaws are revealed, on-lookers are often surprised for they usually took the person’s character for granted. If one was able to see the character of a person prior to placing them in a leadership position, many selection mistakes could be avoided. Since that is not possible, we will continue to evaluate leaders on secondary credibility sources and therefore will continue to run the risk of poor leadership selections. However, when an organization promotes a person despite having seen him or her demonstrate an expedient philosophy or self-serving relationships, they send a signal of the type of leadership character that is important. People who have not demonstrated credibility in lower positions simply should never be placed in a leadership position regardless of the results they may have achieved or the networks and relationships they have formed.

The Center for Creative Leadership reports that the most common source of credibility desired by one’s boss is competence (expertise and results). A leader’s followers are also concerned about competence (as a leader) but are equally concerned with relationships (how people are treated). One of the most important issues about leadership credibility arises from the area of competence. Organizational leaders often achieve those roles because of their technical or professional competence. Once they achieve that role followers do not evaluate competence primarily from a technical point of view. Instead they assess the leader’s competence to lead and manage people; to guide the organization to success. If the leader is a technocrat, (value their own technical skills more then their leadership role and skills), they will soon lose credibility as followers will begin to realize that people are simply an organizational nuisance to this leader.

The leadership role requires a person to possess a people credibility source and a productivity credibility source. This mirrors the two areas in which a leader must perform. It demonstrates that a concern for people and a concern for productivity must be integrated into everything the leader does. The leader’s credibility hinges on how he or she fulfills these two aspects of their job. It is the integration of these two areas that are at the heart of building high achieving organizations in which collaboration and engagement of people is commonplace and in which innovation and superior results are achieved. Unfortunately the integration of these two areas is not well understood or practiced and is at the heart of some leaders who try hard being viewed as incompetent.

Interestingly enough research demonstrates that the most underutilized credibility source is in the area of relationships (how people are involved and treated). This deficiency reflects current research on the lack of people skills across all management levels.

F. Credibility Is Not A One-Trick Pony

A person may gain instant credibility for one area of competence or one outstanding attribute; however, a single source of credibility seldom, if ever, is long lasting. For example a person who is charismatic may eventually reveal their lack of competence to achieve results. A person who draws credibility from being a thought leader but lacks the ability to work with others will lose respect due to poor people skills. A person who only has a significant network will find it hard to maintain credibility after introductions have been made and partnerships formed unless value can be added in other ways.

Thus, there must be a base line level of credibility in each of the seven sources shown in the model above for a leader to achieve maximum and sustained influence.

G. Credibility Is Not Transferable

Credibility is earned one person at a time and one event at a time. It is non-transferable from person to person, position to position or organization to organization.

People are initially drawn to a leader based on what he or she stands for. The identical message will attract some but drive away others.
Thus while a leader earns credibility on an individual basis that credibility cannot be transferred to others. It is earned one person at a time.

Finally, it is important to remember that credibility is extremely fragile and is easily broken. While credibility is only gained one individual at a time, unfortunately it can be lost in mass.

Credibility and authenticity are inextricably linked. Anyone can perform in a given moment but sustained credibility is realized only through deep-seated character and beliefs that drive consistent behavior over time. Thus authentic credibility comes from inside the leader and is demonstrated in outward behaviors rather than the reverse. The problem is followers cannot tell the difference in the short run so leaders are initially evaluated on what they say. Over time the evaluation of the leader’s credibility switches to what they do.. Only after a leader is tested in the crucible of conflict or stress, do others receive the confirmation that tells them if the leader truly believes what they have been preaching and if they have the fortitude to put their values into practice. Obviously people who talk the talk but do not demonstrate those statements in practice will not maintain credibility for long.

This is one of the most important reasons why leaders, and especially potential leaders, must begin to think about and articulate what they honor, value and believe in. Beyond defining those values or principles, the leader must ask the question, “If I hold this value, what does is mean I will do?” Without this base of consistent application of values, everything becomes situational which allows the leader great flexibility but eventually destroys his or her credibility.

Leadership Nugget #4: Which Is The Better Decision Making Approach?

“German and American teams were assigned the task of reaching consensus on a complex task. The German groups generated 30% fewer possible solution statements than the American teams but more...

Why Leaders Can’t Lead: The Damaging Impact Of Soccer Trophies On The Workplace

Warren Bennis in his classic book, Why Leaders Can’t Lead: The Unconscious Conspiracy Continues, discussed the forces that impact leaders and diminished their ability to lead. Bennis knew that the...