“As an object encounters the atmosphere, air cannot move out of the way due to the hypersonic velocity, and instead it piles up ahead of the object and compresses into a shock wave. The gases there are compressed rapidly enough to heat up to 20,000 degrees or more, and because of that the radiant heat from the shock wave starts to heat up the incoming object. The heat either melts or vaporizes any material exposed to the shock wave, and since aluminum is used heavily in the construction of spacecraft, the spacecraft tears apart and the pieces melt or vaporize. The shock wave also creates drag upon the object, which slows it down as well and creates immense pressures on it as well”. http://www.quora.com/Why-does-a-spacecraft-heat-up-during-reentry.

Drag, slowness and immense pressure. Just as in space, friction and heat destroy focus, activity and progress on high value in organizations. As a result, all organizations, even great ones, require heat shields (although in most instances, the need goes unrecognized. Consider Apple:

“What (Tim) Cook found out is that there is no preparation for the scrutiny that comes with succeeding a legend. “I have thick skin,” he says, “but it got thicker. What I learned after Steve passed away, what I had known only at a theoretical level; an academic level maybe, was that he was an incredible heat shield for us, his executive team. None of us probably appreciated that enough because it’s not something we were fixated on. We were fixated on our products and running the business. But he really took any kind of spears that were thrown. He took the praise as well. But to be honest, the intensity was more than I would ever have expected.” (“Apple’s Tim Cook Leads Different’ by Adam Lashinsky , Fortune Magazine, March 26, 2015)

(Underlines and bold print are mine)

The Role of A Heat Shield

Many thought leaders market the benefits and prerogatives of leadership. They proclaim, “Everyone can be a leader. Everyone should have their turn at leadership”. What they fail to discuss are the times when leadership is no fun; when it is even unpleasant; and, when the right leadership action might not be applauded but even punished. One of those essential but unpleasant times is when the leader must play the critical role of heat shield.

A heat shield is designed to protect something of value. If it works effectively, it is an essential and valuable activity. When it is needed but is not in place or does not work as intended, damage and loss occur.

The Sources of Organizational Heat

In perfect situations, friction and heat do not occur between leadership levels. The chain of command functions in optimal alignment. In reality, this seldom happens. Every leader will face situations where heat and pressure from above make no sense and in fact appears destructive to the value being produced.

Organizational heat arises from multiple sources. It may come from external or internal customers. It may come from within the work group. It may come from peers or staff functions. But its primary source is the leader’s own chain of command. Pressure, or criticism often comes from above because senior leaders feel:
• Financial or performance targets are not being met
• Results are not being delivered fast enough
• Time is not being spent on high value work
• Problems are being created when customers are complaining
• Cranky and irritable and just want things done their way

All leaders are a part of two groups: the group they report to and they the group they manage. When leaders link those two groups, there is unity, alignment and synergy. When they do not, tension and conflict occur. As a result, every leader will, at some time or another, be placed in the role of being the person in the middle during a time of significant tension. When that happens, leaders must decide if it is appropriate to play the role of a heat shield. If they decide it is necessary, they must play that role well because the stakes are high.

The Decision to Deflect Heat

Making the decision to be a heat shield is not usually an easy one. The leader may face criticism, or at least skepticism, from senior leaders if their direction is ignored. The leader may also face criticism and irritation from staff because pertinent information is not shared with them. Skillful leaders attempt to prevent these issues from happening through careful priority setting and communication. Unfortunately, prevention is not always possible since even the most skillful leaders cannot control the actions of those above them (or beside them; or beneath them, etc., etc.).

In order to decide if and when to protect staff from heat, three questions must be asked and answered.

1. Is the “heat” focused on high value work or activities?
Sometimes heat from above is directly related to high value. Work activities or projects are off track or are not going to produce the results expected. Objectives are not going to be accomplished. This kind of heat, while uncomfortable, must be heeded and resolved. When resolved, this type of heat produces even higher levels of performance.

However, when heat is focused on the trivial or marginal it has little value. This kind of heat slows and hinders progress and it impacts staff morale and enthusiasm. (Note: disagreement with superiors over what is high value is a significant driver of friction, heat and conflict. Attempting to be a heat shield when high value is unclear is almost always viewed as negative by upper management).

2. Is the data on which “heat” is focused valid?
Heat occurs because ignorance exists. Senior leadership may not know the actual facts. Detractors may have even sold senior leaders a bill of goods to sway their thinking. When people are uninformed 0r there is an absence of understanding, heat tends to develop. When organizations play “what if” without factual knowledge of what is being done, friction and heat overwhelm high value activities. As a result, valuable time and energy is spent chasing low value data to answer insignificant questions.

3. Will sharing the “heat” hinder or defocus performance (current or future)?
(Note: This is not the most important question, which is why it is asked last, but it is a question that must be considered).

Heat, even if it is about low value and not data driven, can create problems for the leader or staff down the road. Some senior leaders have long memories. Subordinate leaders can win a battle and lose a war. Thus the reputation and of the leader and the team may be impacted long after a particular issue is revolved. The reality is that political implications must be considered when deciding how to handle low value heat situations.

Based on how the leader analyzes the three variables, a choice can be made about how to handle specific heat and pressure situations. Appropriate leadership actions can be illustrated by the use of a decision tree. 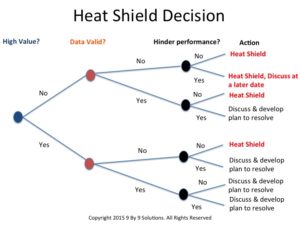 Note there are two major choices that can be made.
First, the leader may play the role of the heat shield and deflect heat so work can continue on high value actions. That alternative is most appropriate when the heat is not high value (question 1).

Second, the leader may address the issue immediately. This alternative is most appropriate when the heat (or feedback) is high value.

As a result, an emotionally intelligent manager develops the skill to distinguish between high and low value. Hopefully clarifying high value occurs early and often with senior leaders’ input so that agreement and support are built and sustained.

It is important to note that leaders have fallen on their own swords for attempting to play the role of a heat shield when the situation did not call for it. Insuring the situation and timing are appropriate is the first decision a leader must make in being an effective heat shield. As noted above, deciding to play the role of a eat shield is only one facet of the equation. If the role is performed poorly, then success is unlikely. Many managers have paid a high price for doing the right thing in the wrong way,

Part 2 of this article will discuss how heat is deflected and the costs to be considered before playing the role of the heat shield.

leader as a heat shieldleadership

What I Learned About Engagement From A Typewriter: A Case Study

Engagement is not a new concept; great leaders have been using it for years. But it is a concept whose time is now. Organizations need strong employee engagement. Picture an...

If leadership were an organization it would rival cable companies and airlines in the degree of customer dissatisfaction. While leadership is in great disrepute to be fair, leadership is a...

Leadership in Pictures #3: The Hardest Job In Any Organization

I can't say it any better than this. What are your thoughts, ideads or comments? Copyright 2015 9 By 9 Solutions All Rights Reserved