If I were to enter the workforce today, there is no way I would be considered or hired for the jobs in which I started my career. After graduating from college with a liberal arts degree I entered the Army, went to Vietnam and came back to the states and entered the workforce with a diploma and two years of “leading men” into combat on my resume. (This soldiers I led might quibble with the term leading!)

I quickly found that I would not get a job in my chosen field (wrong time, few jobs) so I began to look in the business world for employment. Some employers would not talk to me because I had served in Vietnam and a few offered me sales jobs (selling insurance was not in my vision for a career). Finally I was employed as a systems analyst at a bank (this with an education degree). Less than a year later I received a pay increase to take a job in state government (banks gave nice titles but not a living wage at the time). I took a test to qualify for the state government job to show that I had the basic knowledge to qualify for the opening.

Today my resume would not be looked at by either of those two organizations. The reason? Shortly after I was hired the Equal Employment Act of 1964 as amended was implemented. All future personnel decisions were to be job related. In many ways this act was a good thing. For example, Performance expectations and performance evaluations became more job-related. It made management focus on performance more than who a person was or how they looked.

Like all good things, job relatedness had a dark side. One business area that suffered immensely because of the emphasis on “job related” was hiring. People who did not have the right degree were not qualified or considered for employment. Degrees and experience had to line up directly with specific job duties that the job required. As a result, the pool of eligible candidates became narrower. Instead of looking for a great person or a great thinker who could be trained in technical skills (without regard to race, sex, religion, national origin, age or disability), the employer was left to look for a candidate who had documented experience that aligned to a specific job opening.

Over the years several trends have exacerbated this issue.

First, the de-professionalism of the Human Resource departments. (How did we ever get that name? Shouldn’t it be the paper pushers department?). HR departments don’t have time for people so when forced to hire they screen applications. Not personally – God forbid, they might actually have to meet a real unemployed person. So the process is to submit the application on-line and make sure the right buzzwords are used (because that proves talent) or one will never get past the RAM of the computer system. On what are you screened, you might ask. Job related qualifications, of course. Are you a great thinker with conceptual abilities, creativity and high potential leadership capabilities? Tough luck – not what the job calls for!

Second, colleges have gotten into the act by diversifying their degree programs to the point that a decision as an eighteen year old narrows considerably the career options for the 25-year-old. (Not only that, making a career shift is much harder now. Going back to school to learn a new area is not an option for a lot of mid-career people and getting experience with nothing on the resume is futile).

In the last decade, traditional colleges have turned the latest hot career fields into their newest majors as a way to attract students: Sustainability, Gaming, Homeland Security & Sports Management. Since 2000, the overall number of majors on college campuses has grown by 21 %. According to the Chronicle of Higher Education (August 2013) by narrowly tailoring degrees, colleges have shortchanged the valuable skills that employers seek: communication (writing and oral), creativity, adaptability, and critical thinking. Many of these “hot” majors demand very little in terms of intense writing, reading and thinking.

But this is not happening just in the off the wall degree programs. It is also true for the new gold standard, the business degree. The CHE Analysis reports that in a four-year business degree program composed of 40.3 courses, an average of only 1.1 of those courses required 20 or more pages of writing and only 3.5 required 10-19 pages of writing.

Richard Arum, writing in Academically Adrift: Limited Learning on College Campuses, states that after 4 years of college there is minimal improvement in writing, complex reasoning or critical thinking. 45 % of students made no gains during their first two years of college. 36 % failed to show any improvement after four years. Additionally, 35 % of students reported studying five hours per week or less.

The impact of these trends was brought home to me when I read two studies this week. I realized how we are flogging ourselves for lack of talent when we probably are looking under the wrong rocks – all in the name of job relatedness!

The first study was from CareerBuilder. It found that in hiring, employers favored business graduates above all other majors. As evidenced by CareerBuilder’s chart below, business majors were preferred far and away over other degrees. (Can’t go wrong with hiring IBM, right?) 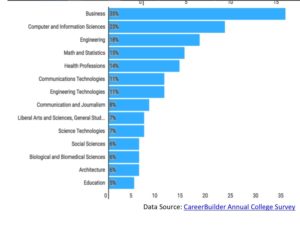 Then I read a second study by DDI analyzing the degrees that best build leadership skills. Surprise, surprise! Business degrees did not accomplish that goal, not did IT or Engineering degrees. Rather it was the lowly humanity degree that best performed against the dimensions of leadership. 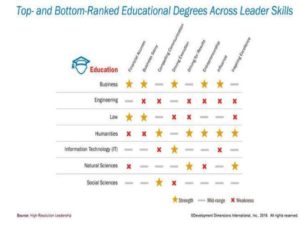 According to Fast Company, in an earlier analysis of DDI’s data “good leadership is rooted in successful conversations. Beyond communication and interpersonal skills, those with humanities degrees had stronger entrepreneurial skills and were more results-oriented.” http://www.fastcompany.com/3059182/which-degree-will-make-you-a-better-leader. This is the same humanity degree that will not be qualified for most business jobs because it is not job-related.

Everyone agrees that leadership is a huge need. “Good leaders are hard to come by. Almost half of the companies that participated in the Workplace Trends’ Global Workforce Leadership Survey in February and March 2015 chose leadership as the hardest skill to find in employees. What’s more, among the 1,000 employee participants, only 36 percent called leadership a strength in their organizations”.
https://www.entrepreneur.com/article/274422

Maybe we need to quit thinking so much about a direct job-related line of sight from degree to the job and instead begin to focus on those who can think and reason and see the big picture. Maybe then we can begin to grow innovation, creativity and and leadership that sees and thinks outside the box.

Recently I read an article on the most overused and meaningless phrases in organizations. (There were sure a lot of them! It seems many people communicate in buzzwords and catch...

Teamwork Lessons From One Of Baseball’s Greats