“What we have here is a failure to communicate.” The Captain, Road Prison 36 from Cool Hand Luke 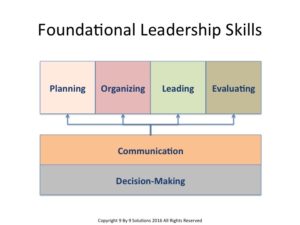 Second, communication often takes the blame for many other problems. Because it underlies everything else it is easy to blame a host of issues on communication. “I didn’t understand or you weren’t clear” are often the rationale given when a person simply did not want to do what was being asked. For example, poor communication is cited as the main cause of failure for IT projects by 28% of respondents in a survey conducted by a national association of IT professionals. http://www.computerworld.com/article/2543770/it-management/survey–poor-communication-causes-most-it-project-failures.html.

One study even lays blame for poor productivity on the doorstep of poor communications.
• “$37 billion: total estimated cost of employee misunderstanding (including actions or errors of omission by employees who have misunderstood or were misinformed about company policies, business processes, job function or a combination of the three) in 100,000-employee companies, among 400 surveyed corporations in the U.S. and U.K. (average cost per company is $62.4 million per year)
• $26,041: cumulative cost per worker per year due to productivity losses resulting from communications barriers”
http://www.holmesreport.com/latest/article/the-cost-of-poor-communications

As a consultant I often hear people describe the problems in their organization by stating, “we have a communication problem.” As a rule of thumb I know that communication is generally not the major issue. In fact sometimes helping an organization communicate better only makes the problem worse since people are able to more clearly articulate their problems!

No one can deny the importance of communication to the leader. While there are numerous aspects of communication (listening, non-verbal, proxemics, writing), I want to focus on one critical aspect that determines how others evaluate a leader: the ability to persuasively and logically communicate with others. This is an area that if not done well will create significant problems.

Persuasive communication is a skill that appears to be deteriorating. I can remember years ago when I was doing leadership training a participant who was reporting on some work her group had done. She started in the middle; rambled around their recommendation and left everyone is a state of confusion. I can remember thinking at the time that this person would have serious problems in trying to lead people.

Unfortunately that problem is on the rise. Two studies indicate the trend. First according to a 2011 Job Outlook survey, employers listed verbal communication as a key skill they seek in job candidates, but graduates’ expertise in this area is falling short. When asked about teamwork and analytical skills, employers were “very satisfied” with recent graduates’ skill level. However, when it came to verbal communication skills, ratings scored between “somewhat satisfied” and “very satisfied.”
http://www.naceweb.org/Research/Job_Outlook/Job_Outlook.aspx

Second, in a 2016 study done by Payscale, managers reported on skills missing in new graduates entering the workplace. The chart below shows what they reported. 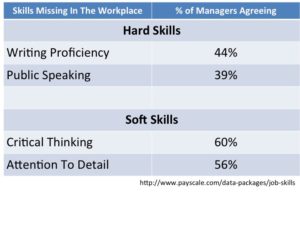 These deficient skills are troubling because when analyzed together they form the basis of the ability to communicate persuasively. Clearly public speaking is central to persuasive communication but the ability to speak in front of people is not enough. Comedians can do that but comedians are entertainers, not leaders. The fact that managers see critical thinking and attention to detail as the top two missing soft skills indicates that organization and logic are missing. If they are lacking in the writing and public speaking skill set it indicates that for many the ability to persuasively communicate is lacking. 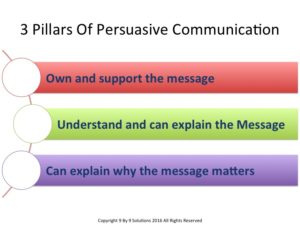 1. The leader owns and supports the message
While the message may have originated many organizational layers higher than the leader who is communicating the message, followers carefully notice if this leader is willing to own the message and direction. No matter how articulate the leader is, if others sense leaders are not willing to put their heart into it, to “own” it, they will not be willing to embrace the proposed direction. We have all observed leaders who communicate while constantly referring to “they and them” as the owners of the message. They carefully insinuate that the message belong to upper management but not to me. Clearly this leader is avoiding personal ownership. Those who listen will do the same. Support for any message is demonstrated through passion and excitement about the direction. Most people take to heart how enthusiastic their leader is about their message. Many efforts fail at this point because people realize “if it is not good for the goose, it is not good for the gander.”

2. The leader understands and can explain the message
Simply owning and supporting the message is not enough. Leaders must be able to explain the message in a logical way. When the leader does this, it demonstrates two things:
a. The leader knows and understand the concept well
b. Sufficient planning occurred to explain how to make the message a reality. There is nothing that diminishes persuasiveness quicker than a message that is confused, illogical or random. When presenting the message, the leader should consider using one of the following formats so that people can keep a clear mental picture of where in the proposed plan they are.
i. The tried and true military method
1. Tell them what you are going to tell then
2. Tell them
3. Tell them what you told them
ii. Beginning to end (start to finish)
iii. Numbering points: First, second, third,
iv. Sequencing: after this is done, this will happen
v. Process format (first step, second step, etc.)
vi. Topical (moves from idea to idea, theme to theme, etc.)
vii. Chronological (uses time sequences for a framework)
viii. Classification (presents information according to discrete categories)
ix. Problem/Solution (presents a problem with one or more solutions to it)
x. Cause/Effect

In addition the leader should use transitions between main points and summarize periodically so people will understand where they are in the message, what has been covered and what is next to come.

There s a typical pitfall for leaders at this point. Often a leader thinks their message through in their head and it makes perfect sense and is logical. Yet when the presentation is made leaders find themselves stumbling and confused. It is not always possible, but when a message is very important leaders serves themselves well to practice their presentation beforehand to ensure it is as logical as it appears in their brain.

3. The leader can clearly explain to others why the message is important to them
Logic and excitement by themselves are still not enough to persuade others. The leader must also define the “bridge.”

The result of ensuring these three items are done well is that a seed of confidence is planted. People have rationale on which to make a decision that this is a legitimate effort that should be supported.

The Result Of Persuasive Communication 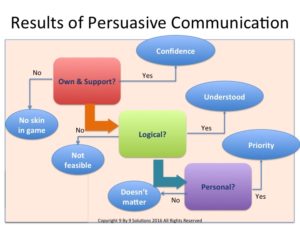 For many leaders persuasive communication does not come naturally, it takes time to develop and hone as any skill does. When it is a part of a genuine and authentic leadership style it is a powerful leadership weapon.

Has Your Staff Ever Pushed You Into Actions You Knew You Shouldn’t Take? The Need For Leadership Conviction

Recently I read an interesting article, “WHY IS IT SO EASY TO GET PEOPLE TO DO BAD THINGS?” http://iheartintelligence.com/2016/04/13/people-do-bad-things/. In the article, the author reviewed the Milgram experiments of the...

Teamwork Lessons From One Of Baseball’s Greats