“People, people who need people are the luckiest people in the world” Barbara Streisand

When I was being trained to be a military officer in the early 1970’s we were instructed never to be friends with the soldiers reporting to us. Fraternization and friendship were to be avoided at all costs. Both of these actions could place the leader in jeopardy in terms of making right decisions without being influenced by the concern for one person over the good of the group or the mission.

As Bob Dylan sang, “the times, they are a’changin.” Many forces are acting on the leader that makes me pose the question, “should a leader be friends with his or her staff?’
First, a relationship with the boss is important to many people. About four in ten workers (39 percent) say they are friends with their boss (Harris Poll on behalf of CareerBuilder). People want to spend time with the boss. According to a study by Leadership IQ, most people spend only half the time with their boss that they should. People who do spend an optimal number of hours (six hours per week) with the boss are 29% more inspired, 30% more engaged, 16% more innovative and 15% more intrinsically motivated than those who spend one hour per week. So if significant time is spent with the boss, there are more positive results and there is more opportunity to get to know each other on an individual level.

Second, research suggests that the millennial generation want a relationship/friendship with their leaders. According to The Millennial Compass, millennial workers do not want a hierarchical relationship with their boss, they desire collegial relationships. LinkedIn conducted a survey which suggests many millennials say workplace friendships made them happy—half of those surveyed said such relationships motivate them, and 30 percent said these friendships make them productive. http://www.businessweek.com/articles/2014-07-09/most-millennials-would-sacrifice-a-work-friendship-for-a-promotion. Life in the workplace is very different for millennials compared to outgoing baby boomers, another survey shows. Millennials are more likely to make friends with people at work, and consider work an extension of their lives, according to a LinkedIn poll. The survey suggests millennials socialize with their co-workers outside of work hours far more often, whether that’s simply sending e-mails or texts or going out for drinks. But just as quickly as friendships are formed, they can be sacrificed, with 68% of millennials saying they’d end a friendship for a promotion, while 58% of boomers would never even consider it. http://business.financialpost.com/2014/07/08/millennials-are-way-more-cut-throat-than-most-of-us-think/

Third, there is a heavy emphasis on engagement and collaboration which places leaders and employees in close proximity for longer periods of time around significant issues. This can creates a closeness which may lead to a deeper knowledge and appreciation of a person thereby creating conditions for a deeper friendship.

Fourth, an informal survey of senior executives indicates that their relationships, as much as their experience and talent, drive their ability to succeed. Many executives say their best friends (and only friends?) are the people with whom they work.

The leader’s dilemma.
When a person is hired you get an entire person. Henry Ford once bemoaned, “Why is it that I always get a whole person, when what I really want is a pair of hands?” What happens to people outside the 9-6 time slot affects 9-6 performance. To be a leader demands caring about people and that extends beyond the work week. So a leader cannot be aloof. A good leader integrates a high concern for productivity with a high concern for their people in everything they do.
But a leader cannot be too close to staff. There is a distance that is appropriate and necessary for a leader to maintain. The questions are “does being a friend interfere with being a leader?” and, if so, “where is that line?” According to Be the Boss, Not A Friend”), the role of a leader is often significantly different than the role of a friend meaning that both roles cannot coexist. Consider these areas discussed in that article (http://fortune.com/2011/01/18/be-the-boss-not-a-friend/).
• Friendship exists for itself – it accepts people the way they are. Leaders create change, growth and development in people and organizations.
• Friends are equals – rank or position is not considered in a friendship.
• Friends accept each other as they are. Leaders must deal with issues that need to be addressed such as deficiencies or shortcomings.
• As a practical matter, a leader cannot be friends with all his or her people equally. Leaders cannot have or play favorites.
• Friends do not hurt friends. Sooner or later a leader may have to decide against, disappoint, criticize, discipline, demote, or even fire someone who works for him or her. To someone who thought they were a friend, those actions can feel like a personal betrayal and often damages and even destroy that person’s commitment to the work and to the leader.
Levels of friendship

The appropriate relationship between a leader and staff can be clarified by considering the 4 levels of friendship. 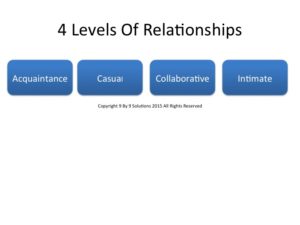 Being unfriendly is as bad as being too friendly. The paradox of leadership is the leader must care about people but the level of caring must be appropriate. Too distant or too close is equally bad. The chart lays out four levels of relationships. The areas in red indicate inappropriate levels of employee relationships. The area in green, collaborative relationship is where a leader’s relationship with staff is most effective and where the leader is most able to effectively optimize a high concern for people with a high concern for results and productivity. 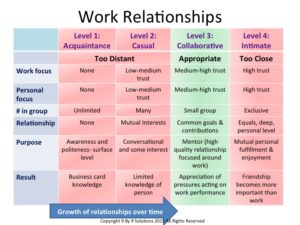 When does a leader’s work relationship cross the line?
Leaders who genuinely care about their people can find themselves being drawn into friendships that are deeper and more exclusive than they should be. How can the leader tell when they are about to cross that line? Below are several guidelines that can serve as warning flags when a collaborative business relationship is beginning to turn into an inappropriate level of business friendship.

II. A person is treated differently
• A different set of performance criteria are used to measure accomplishments and provide assignments, rewards and recognition
• Mistakes and errors are overlooked due to the relationship

IV. The leader learns personal information that places him, her or the organization in a future precarious position.
• Some leaders dive too far into an employee’s personal life. Consider this scenario from Attorney Michael Schmidt on law.com.
o Suppose the leader learns an employee is a member of a specific group or association or holds certain beliefs
o Suppose the boss must later discipline the employee because of performance issues.
o The employee then could argue that the boss (and the organization) used the personal information as a basis for the action.

VI. The relationship is stronger after hours than during work hours

VII. The relationship places the employee at risk with other team members
• Others see real or perceived favoritism become jealous or threatened and take it out on the employee, leader or both.
VIII. Exclusivity
• The relationship with one person excludes others from the work inner circle.
• The leader does not act without seeking this person’s opinion to the exclusion of others.
• The leader goes to lunch and meetings with this person regularly to the exclusion of others.

The real danger of personal work friendships is often hidden. Consequences and implications occur slowly over time and are often unnoticed early (and many times until it is too late). The admonition to leaders in considering work friendships is, “count the cost.”

Copyright 9 By 9 Solutions 2015 All Rights Reserved

Why Leaders Can’t Lead: The Deification Of Leadership

Warren Bennis in his classic book, Why Leaders Can’t Lead: The Unconscious Conspiracy Continues, discussed the forces that impact leaders and diminished their ability to lead. Bennis knew that the...

Shoddy Leadership: 90% Of Leaders Are Average Or Worse – Why?

(This article is modified from an article originally authored and posted on LinkedIn in July 2014) I. Shoddy workmanship is a sign of our times We live in a world...

Do You Know The Difference Between An Engineer and A Manager? Caution: The Truth Hurts!

I was in a plant working on a project and one of the senior linesmen called me over to his station. When I go there he asked me if I...