I. Shoddy workmanship is a sign of our times

We live in a world of shoddy workmanship. In 2012 there were more than 650 car safety recalls affecting over 17.8 million vehicles; that number rose to 22 million vehicles in 2013 and today it seems that the automotive industry is recalling cars faster than it is making them. This is just the tip of the shoddy workmanship iceberg. 1.2 million tires were recalled; 30,000 boxes of cereal – glass fragments; cycling helmets – head-injury risk; Christmas tree lights – fire hazard; beds – excessive lead levels in paint; cinnamon rolls – plastic pieces in the cinnamon rolls; 8 million toys recalled. The list of shoddy workmanship is almost endless.

II. Shoddy Workmanship Is Common In Every Profession, Even Leadership
Shoddy work is clearly evident in the area of management and leadership (The terms are being used interchangeably). 70% of managers are either not properly developing or are outright depressing their employees. This costs the U.S. $450 billion to $550 billion per year (Gallup). Seven out of ten workers (79 % of Gen Y workers and 67 % of Baby Boomers) admit that they search for new jobs as part of their “regular routine” and 35 % say that they start looking for a job within weeks of starting a new position. (CareerBuilder)

Most leaders do not strive to be mediocre or worse and most do not consider themselves as marginal yet for many leaders their followers claim otherwise. This is a huge blind spot.

Leadership articles ad infinitum detail poor leadership practices symptoms. The tone of most of these articles suggests what we already know: leadership is in disrepute. The articles go on to enumerate the many sins of leadership: micromanagement; distrust; failure to communicate; unclear expectations; no recognition, self-adulation and just plain being too busy to care about people. If leadership were a company, its reputation would have already put it out of business. Attempting to list all the varied bad leadership practices is an impossible and not very productive task. In doing so the focus is on symptoms, not the root cause of poor leadership. The real question is “what is the underlying issue that creates a “bent” toward good or bad leadership?”

Many people believe is a process or a series of practices. Leaders do these things, they believe, and their quest is to build a toolkit of leadership skills. While skills are important, this is not where leadership begins. Leadership is first a series of beliefs, a philosophy. Skills follow and are greatly influenced by what that philosophy is. Most leaders never spend any time seriously considering what they believe about people, work and the role of leadership and, as a result, they have no clearly articulated principles to guide them through difficult decisions.

In 1960 Douglas McGregor wrote The Human Side of Enterprise in which he described two philosophical approaches to leadership. The first he called Theory X. This leadership approach had several basic beliefs (think carefully about the leadership implications of each statement):
1. The average person dislikes work and will avoid it if he/she can.
2. Therefore most people must be forced with the threat of punishment to work towards organizational objectives.
3. The average person prefers to be directed; to avoid responsibility; is relatively unambitious, and wants security above all else.

This philosophy points to a leadership style that believes (or acts as if) people cannot be trusted to perform on their own. This requires the manager to constantly oversee effort and activity to ensure success. This leader feels he or she must control, direct and oversee the workplace to insure that results are produced on time, in sufficient quantity and to the quality level desired.

McGregor described a second leadership philosophy as Theory Y. This theory also had certain basic beliefs (again, think carefully about the leadership implications of each statement):
1. Effort in work is as natural as work and play.
2. People will apply self-control and self-direction in the pursuit of organizational objectives, without external control or the threat of punishment.
3. Commitment to objectives is a function of rewards associated with their achievement.
4. People usually accept and often seek responsibility.
5. The capacity to use a high degree of imagination, ingenuity and creativity in solving organizational problems is widely, not narrowly, distributed in the population.
6. In industry the intellectual potential of the average person is only partly utilized.

If a leader truly believed this philosophy, he or she believes that people can and do excel at work. The leader would attempt to integrate and align efforts by practicing a more engaging, participative and collaborative style. A leader guided by Theory Y would work to build commitment by setting clear expectations as well as guiding, supporting and coaching talent to achieve those expectations and goals.

Insight 1: Leadership is first and foremost a philosophy (set of beliefs), but those beliefs must be consistently put into practice. Consistency between words and practices is essential for great leadership. Unfortunately one of the greatest causes of poor leadership is leaders who talk the Theory Y talk but walk the Theory X path.

V. Two fundamental leadership questions
The problem many people have with McGregor’s Theory X and Theory Y is that it lays out two prescriptive choices. It is not important that people accept one of McGregor’s theories as their own. What is important is that leaders answer two fundamental sets of questions that underlie McGregor’s work.

Question 1: “What do I believe about people and their role in producing significant results? How do people and work interrelate? How should a leader balance the need to achieve high productivity and results with the needs and contributions of people?”

If the first question is all that is answered, it will be an exercise in futility. A second question, equally, if not more, important must be addressed:

Question 2: “Based on what the leader believes about productivity and people, how are these beliefs applied to the treatment and involvement of employees in the workplace?’

Insight 2: Just as in Robert Frost’s poem, leaders must determine which road they will travel.

Insight 3: If a leader does not believe that people and productivity mix, then that leader will never consistently practice high achieving leadership/management skills.

Leadership starts in the mind – what leaders believe about people but it is followed by a question of the “will”. Do leaders have the will to practice what they say they believe? 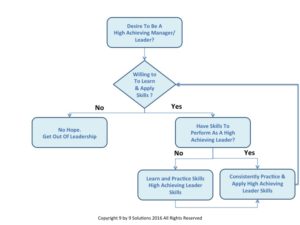 As the decision tree indicates, leaders must face the question, “do I want to be a high achieving leader – do I want to be great at this profession of leadership?’ If the answer to that question is “no”, that is honest but the leader should get out of leadership and not continue the shoddy workmanship for the many who will be impacted by the leader’s work. If the answer is yes, a second question, “ Do you have the skills to perform as a high achieving leader” must be answered. Will alone does not win the battle. It is the will to gain and use the required capabilities that counts. Most leaders cannot honestly answer this question by themselves because of personal blind spots. Most of us are superior performers in our own minds. Therefore, Feedback, advice and the counsel of trusted advisors are necessary to point out our strengths and weaknesses. Listening to this feedback can be very painful which is why the process requires will. Almost all leaders will discover they have gaps in their leadership capabilities and practices. Therefore the question becomes, “Am I willing to gain and practice those capabilities that I lack). If the answer is yes, then the development process begins until the skill is learned, routinely practiced and applied. One will note that there is a line from high achieving leadership back to the core question, “Are you able to perform as a high achieving leader”. Leadership is a constant learning process, if not in the development of new principles and skills, then surely in learning to apply those principles to unique situations.

VII. The Root Cause of Poor Leadership: The Barking Dog With A Wagging Tail

Today most managers and leaders will say that people are important. It is politically incorrect to say otherwise and besides most leaders do believe in their head that most people are important. Most leaders are exposed to leadership training and the latest concepts. Leadership terms and slogans can be spouted with authority. “40 mile marches, point the way, situational leadership, servant leadership, right people on the bus, lead from the heart, people are my most important product, ad nauseam”. Therein lies a major problem. Instead of learning how to lead by learning skills, many leaders feel they learn to lead by learning new phrases. The latest and greatest is more important than the tries and true. (Of course the many charlatan leadership thought leaders who are trying to earn a buck off the leadership profession fuel this insanity.) Leaders adopt and discard these magic bullets without any behaviors to reinforce that they are genuinely understood or believed. Thus many leaders “talk the talk” without building any foundation that “walks the talk”.

It is said that McGregor was discouraged over the fact that his “model” quickly became popular and then trivialized. He felt people used the terms “Theory X and Theory Y” without truly understanding the concept. Douglas McGregor’s discouragement remains with us today. Our problem today is not knowledge. As Peter Bergman writes in his HBR blog article “Why So Many Leadership Programs Ultimately Fail”,

VIII. Then what is the problem?

Too many leaders use Theory Y language but practice Theory X behaviors. This inconsistency does more damage than all other leadership failures. The gap between words and deeds speaks loudly. Managers do not understand why they are so loudly criticized when they have expressed verbally that people are important. Employees observe the gaps between the walk and the talk and they do not understand how a leader can speak one way and act so differently. Trust and respect deteriorate.

Insight 4: Leaders are often like a barking dog with the wagging tail – employees often have to determine which end to believe!

IX. What Can A Leader Do?

The first step on the path to great leadership is taken when the leader does what Douglas McGregor hoped for years ago –think about and honestly answer three questions:
1. What do you believe about people and their role in producing significant results?
2. What practices are necessary to make those beliefs a reality?”
3. Are you willing to learn and consistently practice those behaviors?

It always helps if the leader would sit down and write their leadership philosophy. This should not be written the way many organizations develop their statements of core values: by listing every positive value known to man. Instead write down what you really believe and see where the application of those beliefs points you.

Let me know if you would like to see a copy of my leadership philosophy.

Leadership In Pictures: The Subtleties of Great Leadership

Great leadership is grossly misunderstood. It is not that there is not enough knowledge about leadership: books, articles and seminars abound. There is just little understanding about what really makes...

Looking Into The Souls Of Psychopathic Leaders

In her article “7 Things Rich People and Psychopaths Have In Common”, Morgan Quinn reviews multiple studies on psychopathic behaviors. (http://www.reviewjournal.com/business/money/7-things-rich-people-and-psychopaths-have-common). The research Quinn cites in her article is summarized...