Jim Boeheim is the latest in a long line of disgraced leaders. In a stunning moment Boeheim’s reputation, legacy and accomplishments are gone but the actions creating the fall from grace have been in development over many years. The Atlanta Journal and Constitution’s Jeff Shultz writes:

“Jim Boeheim has long been one of the nation’s finest college basketball coaches. He can be thoroughly entertaining, even if combative, in news conferences. But arrogance can lead to anybody’s undoing, and consider the Syracuse coach the latest example.
Boeheim and his program were slammed by the NCAA for multiple violations Friday, including the mother of all no-nos: academic fraud.
The NCAA said Boeheim “failed to monitor his program,” noting infractions included “academic misconduct, extra benefits, the failure to follow its drug testing policy and impermissible booster activity.”

Unfortunately Boeheim is just one of many recent leaders who have demonstrated leadership dishonesty.

Brian Williams removes himself from his position because he has become the news rather than report the news. Then NBC suspends him for being caught in a lie and then trying to gloss over it.

“The scandal erupted earlier this month when Williams attended a New York Rangers game with a soldier who helped guard him and other American soldiers while a convoy of military helicopters they were flying on was forced to land on a desert in Iraq in 2003.
Williams said the helicopter he was on had been hit by enemy fire and forced down. Veterans from the convoy challenged Williams’ story — which he has repeated in the past — on Facebook. And the anchorman recanted the story on air Wednesday after Stars and Stripes wrote a story about their online exchange and interviewed Williams and the veterans.
Other news reports began emerging after the story, questioning other Williams’s statements. Williams has said he saw a body floating in front of his hotel in the French Quarter of New Orleans during Hurricane Katrina. The New Orleans Advocate pointed out last week that the Quarter was mostly dry and quoted an official questioning his story.”

Hillary Clinton claims she had to duck and run from a helicopter under heavy sniper fire in Tuzia, Bosnia in March, 1996.

During an introduction to a foreign policy speech on Iraq on March 17, 2008, Sen. Hillary Clinton reminisced about her days as first lady and her trip to Bosnia.
”

I remember landing under sniper fire. There was supposed to be some kind of a greeting ceremony at the airport, but instead we just ran with our heads down to get into the vehicles to get to our base.” (http://www.politifact.com/truth-o-meter/statements/2008/mar/25/hillary-clinton/video-shows-tarmac-welcome-no-snipers/)

Later videotape shows Hillary’s account of the situation was not true as she took a slow walk to her car, stopping to accept flowers from a young girl.

The Root Cause of Dishonesty

Dishonesty is pandemic. It happens in business, government and our homes. Its reasons are many:

1. The desire to make one’s self look important or unique in the eyes of others (See Brian Williams and Hillary Clinton)
2. The need to cover up an action that appeared smart when it was made but is seen as unethical or illegal when it is examined in the light. (See Watergate and Bridgegate)
3. Providing false information in order to create support for an action that would not be accepted on its face. (See “if you like your doctor you can keep your doctor”).
4. The desire to punish opposition because they disagree (see IRS)
5. The desire for personal gain. (See David Petraeus, Enron, Veterans Administration, GAO)

There is a common root cause for all these situations and that root cause is what disqualifies a person from leadership. The root cause is the desire to exalt oneself over others; to see oneself as more deserving than others. It is the antithesis of true leadership. It is arrogance and egotism at its worst. Whereas the genuine leader is concerned for others, charlatan leaders are concerned for personal gain – to place themselves higher than others.

Dishonesty begins in the mind. It stems from the attitude that the leader is above the rules; that normal rules do not apply to him or her. Once the leader determines that he or she is special and therefore deserve preferential treatment , the downhill slide has begun.

The two critical points in the honesty process

When a person is faced with a situation, there are two critical points where they must make a decision between truthfulness and lying; between honesty and deceit. 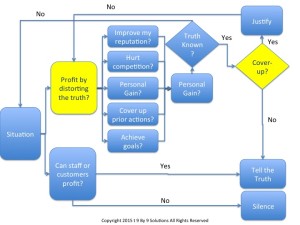 Critical Point #1: The Opportunity.
Every leader is faced with situations where there is a realization that there is personal gain to be had if actions are taken in a certain way . When a leader’s ethics are situational, then these situations are a point where the leader’s values are tested. Unfortunately thee situations do not just happen once. They continually appear and in constant testing of the leader’s values is the trap. The leader sees the constant opportunities for personal gain and the temptation is that the leader is worthy of preferential treatment. Once the rationalization has begin that the leader is worthy of some extra benefit because of their skill or position, then it is only a matter of which temptation the leader will fall for. Once an action is taken that personally benefits the leader and if that leader “gets away” with that action, succeeding violations become easier until a definite pattern develops.

Critical Point #2: The Cover-up
The second critical point comes when the leader’s behavior is uncovered. At this juncture the leader is faced with the two choices:
1. justify or cover-up their actions or
2. Take full responsibility for their actions.

This is a critical point that looks deep into the heart of a leader because even more than falling into temptation, this point reveals the true heart of the leader. Even the best make mistakes, sometimes extremely serious ones. But when faced with his or her actions a genuine leader owns the responsibility (and yes the guilt and shame) for his or her actions (see David Petraeus) . This is a critical point where it is hard to tell if apologies are real; after all words are cheap. But here is a litmus test for true repentance: actions of this nature disqualify leaders from their positions of a leadership for a time. If, after an apology, the leader justifies and rationalizes their actions, tries to explain why his or her behavior was understandable and attempts to keep their position, that leaders only reinforces that they were not qualified for leadership in the first place.

On the other and, if a leader takes responsibility for his or her actions and takes appropriate actions to address their behavior (including stepping down from the current leadership position); learns from their error and demonstrates their changed behavior, then that person demonstrates the true heart of a leader. And for those people there should always be a second chance for leadership.

What is at the core of this growing epidemic of dishonesty? Is it:
1. The failure of our families, schools and churches to teach values?
2. The natural consequence of a “psychology of entitlement” philosophy?
3. The result of situational ethics that allows individual determination of whether or not core values apply?
4. A growing unrest and even anger that others are getting theirs and I am not getting mine?

Unless the root cause is defined and addressed, the road will continue to be covered with fallen and disgraced leaders.

Copyright 2015 9 By 9 Solutions All Rights Reserved

Leadership Nugget #11: Are You A Humble Leader?

“Leaders who rated themselves on the low end of 360-degree surveys received higher leadership effectiveness scores from their employees and colleagues. Indeed, the more they underrated themselves, the more highly...

To the 10-20% of excellent teachers that exist, I apologize and thank you for what you are trying to do. The problem is that most of the other 80% thinks...

If demographic patterns hold, your children could be in the largest U.S. college freshman class ever. That’s because in 2007 U.S. births surpassed 4.3 million – a feat not seen...