Warren Bennis in his classic book, Why Leaders Can’t Lead: The Unconscious Conspiracy Continues, discussed the forces that impact leaders and diminished their ability to lead. Bennis knew that the environment in which a leader operates impacts his or her ability to lead. A great leader in one setting may be totally ineffective in a different setting. Many of us have found that true in our own careers,

As Bennis considered the inability of leaders to lead, he saw multiple causes for this phenomenon. One set of those causes was a series of trends occurring in society. While he did go into depth around these societal trends in his book, he realized that collectively they would have a disruptive impact on leadership; he referred to them as ominous societal trends. It should be pointed out that the interaction between multiple societal trends creates a web of influence that “in toto”, diminishes the leader’s capability to lead. Each trend, taken as a single issue, may not see significant or even noteworthy. In fact some will even disagree that the issue discussed is a problem. However, the combination and interplay between these forces, some subtle and some not, is what is lethal to leadership.

The first article in this series dealt with the Dunning-Kruger effect on leadership. This article is an attempt to look at a second societal trend that adversely impacts leadership ability.

The Failure of the Educational System: The Increasing Scarcity of Talent

One cannot read business surveys and research without running across one specific issue that ranks high on the concerns of business leaders. For example, PwC’s recent 2016 Global CEO Survey reported the deep concern that CEOs have about the level of talent in the work place.

“It’s no wonder, then, that 72% of CEOs are concerned about the availability of key skills, particularly with 48% planning to increase headcount in the coming year. And it explains why by far the most CEOs (75%) say that a skilled, educated and adaptable workforce should be a priority for business in the country where they’re based.” http://www.pwc.com/gx/en/ceo-agenda/ceosurvey/2016.html

If one assumes a normal bell shape curved distribution of intelligence in society then the problem of lack of talent must rest squarely with the institution responsible to develop it – the educational system. Of course proponents of the education system will point fingers art many others: families, congress, society as a whole. None of this negates the fact that the education system is failing in its core responsibility.

Of course the education system will point to the number of degrees produced. Over past thirty years ago (over 25) who have completed high school grew from 54% to 83%. During the same time period adults who obtained a bachelor’s degree or more grew from 10% to 24%. Today 39.6% of students, ages 18-24, are enrolled in college compared to 26.1% in 1980. (NY Times Magazine, November 10, 2013). At a time when more diplomas are being awarded, our schools are producing an increasingly inferior product. We have clearly become over-degreed and under-talented.

“Scores on the SAT have sunk to the lowest level since the college admission test was overhauled in 2005, adding to worries about student performance in the nation’s high schools.
The average score for the Class of 2015 was 1490 out of a maximum 2400, the College Board reported Thursday. That was down 7 points from the previous class’s mark and was the lowest composite score of the past decade. There were declines of at least 2 points on all three sections of the test — critical reading, math and writing.” https://www.washingtonpost.com/local/education/sat-scores-at-lowest-level-in-10-years-fueling-worries-about-high-schools/2015/09/02/6b73ec66-5190-11e5-9812-92d5948a40f8_story.html 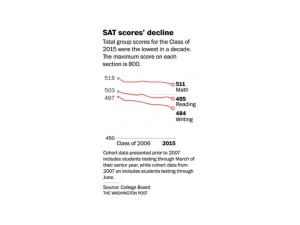 According to the SAT Report on College & Career Readiness, “Of the 1.66 million high school students in the class of 2013 who took the SAT, only 43 percent were academically prepared for college-level work.”
When compared to other countries the US overall grade for education was a C (76.3 percent). Education Week’s Quality Counts 2011.

“In recent interviews with 823 executives, Egon Zehnder found that only 22% view their talent pipelines as promising and only 19% consider it easy to attract the best talent. In an HBR webinar to evaluate how each of these three factors was likely to contribute to talent scarcity in their organizations, on a scale from irrelevant to crucial. Globalization was at least a substantial concern for 62%, demographics for 75%, and talent pipelines for a whopping 84%. https://hbr.org/2014/06/is-your-company-ready-for-the-looming-talent-drought/

According to CEB, executives also say that only 5% of their employees have the combination of skills and capabilities required to deliver desired results in 2013

“Brookings’ Michael Klein and Tufts University’s Matthew Cancian—analyzed test scores of 46,000 officers who took the Marine Corps’ required General Classification Test (GCT). They found that the quality of officers in the Marines, as measured by those test scores, has steadily and significantly declined over the last 34 years.”
http://www.brookings.edu/research/papers/2015/07/20-nber-military-officer-quality-volunteer-force–klein

“Bloomberg Business’s cover asks a somewhat startling question: “Are Lawyers Getting Dumber?” The impetus for the jokey headline is rather serious: Scores from the multiple-choice section of the bar exam last July registered the largest single-year drop in the test’s four-decade history. In six states—Delaware, Iowa, Minnesota, Oregon, Tennessee, and Texas—scores dropped 9 percentage points or more. Erica Moeser, the president of the National Conference of Bar Examiners, told law school deans that the students who sat for last year’s exam in July 2014 were “less able” than those who took it a year prior. “
http://fortune.com/2015/08/20/lawyers-bar-exam-scores-dumber/

In government the same view of talent exists.

“Among the six major issues studied, state and local employees are most concerned about the government workforce. About half of agency executives, and even more, lower level employees worry about the ability to recruit and hire talent for public service. This area is of particular concern as organizations look to fill the long-held positions of retiring baby boomers.”
Public Sector Survey conducted by Route Fifty and Government Business Council.

If people are an organization’s most important resource, the raw materials being received are increasingly inferior than in the past. This is one of the societal trends that Bennis foresaw that clearly limiting the leader’s ability to lead.

One might retort that is the leader’s job to train and develop staff. This is definitely true. However today training and development is remedial – it must concentrate on basic and fundamental skills instead of work skills needed to develop quality product or service.

Furthermore, many are turning to business and leadership to rectify the failings of society. “If I am not trained by the education system, then business should develop me.”

Second the amount of time necessary to train and develop is increasing. This means the leader’s time to perform other leadership functions is diminished.

Third, if one considers that the great majority of students (future employees) feel they are above average (see https://9by9solutions.com/2016/03/why-leaders-cant-lead-the-dunning-kruger-effect/)
then it becomes clear that training, developing and giving feedback (especially improvement feedback), is likely to be received with skepticism or at least disagreement which negatively impacts trust in the leader.

Fourth, employee’s overestimation of their skills leads to the belief that no management is needed (see holocracy). Perhaps nothing is further than the truth since the ability to set people up for success will be an even more important requirement of leadership in the future.

Finally, the leader will be increasingly faced with the dilemma of doing the job him or herself in order to make sure it its done to the specifications desired.

The failures of the educational system clearly impact the leaders ability to lead. The failure of one part of society’s core institutions to perform at a high level will impact all other parts of society and the leaders who lead them.

Upcoming posts series will address additional trends that are impacting the leaders ability to lead.

Copyright 2016 9 By 9 Solutions All Rights Reserved

Where Does The Credibility To Lead Come From? Part 2: Personal Sources of Credibility

Leadership is in disrepute and the situation is getting worse. It is the purpose of this four-part series to explore the sources of credibility that provide leaders the right to...

What I Learned About Engagement From A Typewriter: A Case Study

Engagement is not a new concept; great leaders have been using it for years. But it is a concept whose time is now. Organizations need strong employee engagement. Picture an...

Are You An Optimistic Leader: The Good, The Bad and The Ugly

I. What is an optimistic leader? One of the best illustrations comes from Colin Powell. Powell says that great leaders know things will get better because they themselves will make...