Warren Bennis in his classic book Why Leaders Can’t Lead: The Unconscious Conspiracy Continues, discussed the forces that e impacted leaders and diminished their ability to lead. One of the major forces was what Bennis called ominous societal trends. This article is an attempt to look at one of those societal trends that I adversely impacts leadership ability. It should be pointed out that is the interaction between multiple societal trends makes leaders impotent. Each trend, taken as a single issue, may not seem that significant. The combination and interplay between them is what is lethal to leadership.

Bennis clearly believed that the environment or surroundings that a leader was in impacted their ability to lead. A great leader in one setting may be totally ineffective in a different setting. Many of us have found that true in our own careers.

The Dunning-Kruger Effect Defined
The Dunning-Kruger effect refers to the pervasive tendency of poor performers to overestimate their abilities relative to other competent people. Kruger and Dunning first reported this effect in an extremely influential 1999 article in the Journal of Personality and Social Psychology. The effect involves the tendency for incompetent people not to believe that they are the best in a certain area but rather to believe they are above average.

Examples
• Most overestimate their IQ.“A third of the country (34%) say that they are about as smart as the average person, while only four percent say that they are less intelligent than average Americans.”” (Or, as writer Peter Moore phrases it, “the average American thinks they are smarter than the average American.”) http://www.slate.com/blogs/xx_factor/2014/05/14/americans_think_they_re_smarter_than_the_average_american_rich_white_guys.html
• Many call this the Lake Wobegone effect where “all the women are strong, all the men are good looking, and all the children are above average. 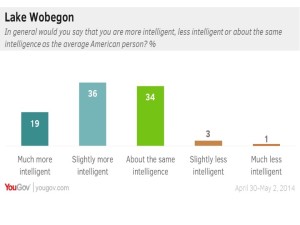 • Dunning found that people overestimate how charitable they’ll be in future donation drives, but accurately guess their peers’ donations.
• 93% of drivers consistently rate themselves as better than average — even when a test of their hazard perception reveals them to be below par, said Mark Horswill, a psychologist at the University of Queensland in Australia. “You find it across all ages, you find it among novice drivers, and you find it among drivers over age 65,”
• In a study conducted by psychologists Hoorens and Buunk, high school students were asked to estimate how true a number of personality traits were of themselves, and of the average student. Results showed that students rated themselves significantly higher than average on positive traits (such as honesty, persistence and originality) and lower than average on negative ones (such as hostility, vanity and reasonableness.)
https://80000hours.org/2012/11/do-you-think-you-re-better-than-average/
• A survey of professors at the University of Nebraska showed that 94 percent of them thought they were better than average teachers. http://www.nea.org/assets/img/PubThoughtAndAction/TAA_06_02.pdf
• Another study looked at how students balanced “self-interest” against “co-operation” in an artificial test, and then, how they rated themselves. In this study, 84 per cent of the students said they would help or co-operate with their fellow students — but only 61 per cent did.
http://www.abc.net.au/science/articles/2013/05/29/3769781.htm
• “Motorcyclists believe they are less likely to cause an accident than is the typical biker (Rutter, Quine, & Albery, 1998).
People think they are less susceptible to the flu than their contemporaries, and as a result avoid getting flu shots (Larwood, 1978).
People signing up to bungee jump believe they are more likely to avoid injury than the average bungee jumper, although their friends and family do not share this impression (Middleton, Harris, & Surman, 1996).
Surgical trainees place too much confidence in their diagnoses after looking at X-ray evidence (Oksam, Kingma, & Klasen, 2000). After looking over a client’s case materials, clinical psychologists overestimate the chance that their predictions will prove accurate (Oskamp, 1965).

The Dunning-Kruger Effect In Business

• Business leaders believe their company is more likely to succeed than is the average firm in their industry (Cooper, Woo, & Dunkelberg, 1988; Larwood & Whittaker, 1977). Of course, the Dunning-Krueger effect would also apply to leaders which means average and incompetent leaders would see themselves as above average. Unfortunately, it also applies to consultants and leadership trainers.
• 32 percent of the employees of a software company said they performed better than 19 out of 20 of their colleagues.
• Ironically, people even state that they are more likely than their peers to provide accurate self-assessments that are uncontaminated by bias (Friedrich, 1996; Pronin, Lin, & Ross, 2002).”
• 4,800 people in a Monster.com survey responded, and 84% of them said, “Yes!”. Monster.com reported the belief that a person they could do a better job than their managers was a widespread phenomenon. Their conclusion? Many employees don’t have respect for their boss.
• Perhaps one of the most significant impacts on business is seen in the longitudinal American Freshman Survey done of college students in America. Over the last 40 years of the study, there’s been a dramatic rise in students who view themselves as ‘above average‘ across multiple dimensions, one of which is leadership. 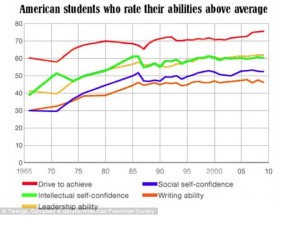 Objective test scores actually show that their writing abilities are far less than those of their 1960s counterparts.

Consider the following observations by business leaders about new talent entering the workplace.
• 65% of business leaders say people applying for jobs right out of college are only “somewhat” prepared for success
– 40% of executives say new grads are “not prepared at all.”
• 47% of executives believe that only 1/5th of new grads have the skills they’ll need to advance past entry-level jobs.
• New grads are seen as deficient in every area, except tech skills
Global Strategy Group Study published in Fortune

Finally, consider the impact the Dunning-Kruger effect has on the organization culture.

Cameron Anderson and colleagues found that overconfident individuals – those who thought their ability to be much higher than it actually was – were given higher status in a group, because they were seen as more competent. This is because overconfident individuals demonstrated the behaviors that we use to judge competence; things like speaking more often, using a confident and factual tone, providing more information and having a calm and relaxed demeanor. Although overconfident individuals didn’t make direct statements about their own ability (“I’m really good at this”), their behavior led others to believe that they were competent, and therefore they were given higher status.
The researchers found that the effect of overconfidence on status wasn’t just temporary. In student groups who worked together on a project, individuals who at the beginning were more likely to ‘over-claim’ (indicate that they were familiar with brands, celebrities and events that didn’t exist) were, 7 weeks later, rated as having higher influence within the group and awarded higher grades by their team mates. http://www.forbes.com/sites/sebastianbailey/2012/10/11/why-i-think-im-better-than-you/#6e47d21410f0

Leadership Implications Created By This Societal Trend:
• Talent
• Feedback
• Quality
Great leaders will continue to push for high standards in all these areas. Average and below leaders will avoid the pain and difficulty by avoiding the issue altogether. Perhaps this is why organizations today are doing away with performance appraisal systems. Maybe it is not the feedback that is inaccurate but instead the unwillingness of employees to hear feedback that does not conform to their high view of their own performance. And of course when leaders tell us our work is just average, then we lose trust in them. Lets face it, if most of us are average, then we all have major areas in which we can improve.

As Bennis predicted: there is an unconscious conspiracy that exists that inhibits leaders from leading.

Leadership Nugget # 14: The Impact Of Visible Values on Organization Culture

Does it help to post scripture verses or virtuous quotes in a person's cubicle or at the bottom of e-mails? Several studies, quoted below, explored that issue. The results of...