I earned a Bachelor of Science degree from college. To obtain this prestigious degree I had to participate in multiple labs where I performed all kinds of acts against nature. One specific laboratory action stood out: dissection. I had the joy of dissecting earthworms, frogs and fetal pigs. 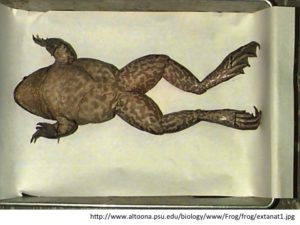 I would carefully cut open the animal and remove certain of its parts to find the organ I needed to study. After I removed the specified part I would examine it, study it and perform other kinds of tests in order to both learn and to earn the desired lab grade. I got a wonderful understanding of different organs and systems so my educational goals were accomplished. One thing struck me. No matter how hard I tried to replace the organs, the animal was still dead. No organ by itself sustained life. No organ, by itself, defined the frog. Multiple organs and systems, each with a different function and purpose but working together as a synergistic whole, are required.

Leadership is not a 5 course meal that can be evaluated in separate parts. It is a stew in which multiple ingredients begin to diffuse into each other creating a blend that no one ingredient could create. One can taste the influence of a specific ingredient but that ingredient’s value in how it blends into the unique whole.

This is especially true of character. No one becomes a leader to develop his or her character. The reverse is true. We begin to develop
into leaders. Today thought leaders study the character of leaders after they become leaders to learn the secret of their success as if any one trait was the “secret” leadership gene. We debate which character trait (or flaw) is the most important. We debate which traits must be listed on a list of leadership character. But in reality, no trait is primary and no trait works alone. (For example in the Fortune magazine article “The One Quality That Defines a Truly Great Leader”, the author can’t limit herself to one item, she describes three traits. (http://fortune.com/2016/04/27/quality-defines-leader).
Character traits depend on each other if one is to be a successful leader. Integrity without compassion results in bluntness and even meanness. Dependability without initiative results in lethargy. Vision without initiative creates a dreamer of dreams that never materialize.

All character traits are important and essential. When they work together, the individual traits produce unique combinations not found any in any other person. It is this synergy that we so often miss in studying leadership. It is the synergy that is the secret sauce, not the specific ingredients. 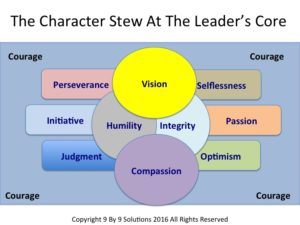 There is a second dimension that creates the uniqueness of a leader. No leader has precisely the same character formula. Different degrees of character traits are found in different leaders. Some leaders exhibit particular strengths in one area while other character traits may be underdeveloped or underused. In a few common traits there is probably a minimum threshold required for every trait but no leader displays every trait in exactly the same proportion. Again this creates the uniqueness of the leader. It also should be the basis of individual leadership development.

These character traits are not about behaviors; they are the attitudes that drive behaviors. These are the basic principles the leader displays when they determine what actions the leader will take in a given situation. They influence how the leader communicates, coaches and motivates. Leadership Development would be well served to ask the question, “If you hold to these values, how then should you plan, organize, lead or evaluate?” Divorcing character traits and values from the way skills are taught and ultimately practiced is one of the biggest drivers of leadership hypocrisy. 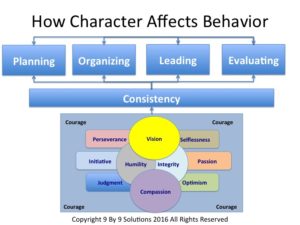 Of course the filter though which all character traits must pass is consistency. Google found consistency to be the most significant aspect of leadership effectiveness. Employees generally can adapt to character flaws in their leaders if those flaws are consistent. It is inconsistency that leads to confusion, claims of lack of fairness and poor employee morale. Saying one thing but doing another divorces leadership character and values from leadership behaviors that leads back to distrust.

How do leaders do this? How can they be so consistent that they remember every single time to practice their values? Simple! Beliefs are practiced so regularly that they become habits. “One paper published by a Duke University researcher in 2006 found that more than 40 percent of the actions people performed each day weren’t actual decisions, but habits. You spend almost half the day on autopilot. And changing bad habits isn’t just “kinda nice.” If you want to be a success, studies show habits really do matter”. (The Power of Habit: Why We Do What We Do in Life and Business by Charles Duhigg).

What Would You Do? There once was a powerful leader who did not believe laws, rules or policies applied to him. They applied to the average employee but not to...

Leadership Nugget #25: Forget the Feedback Sandwich. Get To Your Real Point

People tiptoe around giving feedback that others may take as negative. All types of leadership “wisdom” is provided on how to give negative feedback but unfortunately many if them only...