I. What is an optimistic leader? One of the best illustrations comes from Colin Powell.

Powell is not an unabashed optimist. He tempers his optimism with logic. “Maybe it can’t be done, but always start out believing it can be done until facts and analysis pile up against it. Don’t surround yourself by skeptics but don’t shut out skeptics who give you solid counterviews.” http://www.forbes.com/sites/carminegallo/2012/08/08/5-reasons-why-optimists-make-better-leaders/#526bf2ae659b 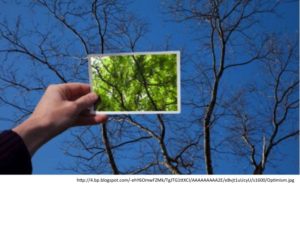 The attitude: A consistent positive approach to situations with the intent of looking for and making positive outcomes happen.

The Behaviors:
1. The willingness to consider an idea or opportunity on its merits
2. The attitude that approaches ideas and opportunities by trying to discern what the positive outcomes are
3. The willingness to listen to multiple viewpoints on “how” to make those outcomes happen before committing to an action
4. Treating others’ viewpoints with openness and dignity
5. Coming up with the best plan to achieve success
6. Assessing risks that could de-rail the approach and planning for them appropriately
7. Making the choice (or recommendation) to proceed based on data, systematic thinking and a cost- benefit assessment
8. When given the order or opportunity to proceed, devoting a 110% effort to success.

In essence optimism and confidence go hand in hand because the optimistic leader has confidence not only in the outcome but that a good plan to get there exists.

“In a survey of 2,175 managers, by CareerBuilder and Harris Poll, 62% say a “negative attitude” and chronic lateness are the main reasons people don’t get tapped for bigger jobs.” http://fortune.com/2015/07/04/how-to-get-promoted-at-work/?xid=soc_socialflow_twitter_FORTUNE

“Job coach Nance Rosen hires people based on their resumes, but promotes them based on their personalities. Talented employees who are pessimistic, doubtful or put their needs before her company’s don’t get far.” http://www.monster.com/career-advice/article/humility-faith-optimism-3-surprising-career-boosters-hot-jobs

“Research suggests that pessimistic managers may not only plan for the worst, but invite it. Margaret Greenberg and Dana Arakawa, graduates of the Master of Applied Positive Psychology program at the University of Pennsylvania, studied the effects of optimistic managers surveyed more than 100 information technology professionals in different individual contributor and managerial roles at The Hanover Insurance Group. They found that optimists do a better job of helping employees reach goals and be more productive.”
http://www.gallup.com/businessjournal/28303/Pays-Optimistic.aspx

A study at the University of Cologne in Germany of more than 1,000 Americans and Europeans found that cynicism may be associated with poverty. The study reported that cynicism demonstrates a person is wary of trusting others. It went on to argue that when you see people in a cynical light — untrustworthy, self-interested and deceitful — you are less likely and less willing to rely on others.
Those in the study who were optimistic and had a more trusting view of others, had higher incomes than the cynics. https://www.apa.org/pubs/journals/releases/psp-pspp0000050.pdf

“In my five-year study of rich and poor people, 67% of the self-made millionaires said that their optimism was critical to their success in life. Conversely, 78% of the poor in my study admitted to being pessimists. Granted, cynicism and pessimism aren’t quite the same, but they have one major factor in common: negativity.
Cynics don’t like working with others, don’t trust others and, as a result, they are left without any team to help them pull the cart. They prefer to go it alone… Cynics push away the very people they need and are left with no choice but to rely on themselves.”
http://www.businessinsider.com/studying-millionaires-showed-me-the-importance-of-optimism-2016-2

III. The Bad: Can A Leader Be Too Optimistic?

Consider the following insights from Gallup:

“ Over the past decade, scientists have explored the impact of positive-to-negative interaction ratios in our work and personal life. And they have found that this ratio can be used to predict — with remarkable accuracy — everything from workplace performance to divorce.

This work began with noted psychologist John Gottman’s exploration of positive-to-negative ratios in marriages. Using a 5:1 ratio, which Gottman dubbed “the magic ratio,” he and his colleagues predicted whether 700 newlywed couples would stay together or divorce by scoring their positive and negative interactions in one 15-minute conversation between each husband and wife. Ten years later, the follow-up revealed that they had predicted divorce with 94% accuracy.

So what is the optimal positive-to-negative ratio in organizations? A recent study by psychologist Barbara Fredrickson and mathematician Marcial Losada found that work teams with a PNR greater than 3:1 were significantly more productive than workgroups that did not reach this ratio.

Positive emotions, however, need to be grounded in reality: Their research also uncovered an upper limit for positive-to-negative ratios of 13:1. When workgroups exceed that PNR, things are likely to worsen; completely blind optimism can be counterproductive — and downright annoying.”
http://www.gallup.com/businessjournal/11458/impact-positive-leadership.aspx

Optimism divorced from reality is not believable. The proof of the optimistic leader is ultimately in execution and this is where the optimistic leader’s staff encounter problem and difficulties. The optimistic leader couples their attitude that a solution can be found with the act of rolling up their sleeves to help find it. Ultimately, optimism without movement creates the belief that possibility is just talk and that is the point that the leader begins to lose credibility.

The Ugly: Optimists Who Are Stretched Too Thin Cease Being Optimists

Optimistic leaders can be their own worst enemies if the do not learn to assess and live within their performance capacities. The optimistic leader does not like to say “no” and as a result, there can be significant demands on their time and energy. These demands create stress that can change the optimistic leader’s outlook because the leader cannot give the time and attention to thinking through a situation before they have to commit. Consider the following research study:

“Optimism doesn’t always equip people for long-term stresses. This was shown in a 2006 study of law students carried out by Suzanne Segerstrom of the University of Kentucky. The immune responses of optimistic and pessimistic students were compared when they were operating under high and low demands for their time and energy. Normally, optimists tend to perceive less stress because either they are better able to cope or because they see the world with rosier glasses. However, when demands become ultra severe, the optimists suffered a lower immune response than pessimists.”
https://www.psychologytoday.com/blog/fulfillment-any-age/201011/the-trouble-optimism

I earned a Bachelor of Science degree from college. To obtain this prestigious degree I had to participate in multiple labs where I performed all kinds of acts against nature....

When Upper Management Becomes the Enemy: The Role Of The Heat Shield Part 1

Organizational Heat and Pressure “As an object encounters the atmosphere, air cannot move out of the way due to the hypersonic velocity, and instead it piles up ahead of the...

What Would You Do? There once was a powerful leader who did not believe laws, rules or policies applied to him. They applied to the average employee but not to...