We all want to be courageous. We read of stories of heroes, men and women who do extraordinary acts. We want to be that person yet we wonder if we would be courageous if we faced that situation. We all like to think we have courage but sometimes we wonder if that is true.

Over the past few months I have been thinking about courage. What is it and how does a leader demonstrate courage on a regular job and on a daily basis? Are there small acts of invisible courage that leaders take or is courage just around the big monumental events?

What is courage?
There have been many attempts to define courage. For example, Merriam-Webster defines courage as, “strength of mind to carry on in spite of danger.” The Oxford Dictionary states courage is, “The ability to do something that frightens one”. Dictionary.com defines courage as “the quality of mind or spirit that enables a person to face difficulty, danger, pain, etc., without fear”.

My definition of courage is this. “Courage is the drive to fulfill an action that a person believes to be right when to act will cost that person something.’ Courage is not the absence of fear. As Winston Churchill stated, “What good is it being chaste, or merciful or honest only when it’s easy? It’s when you are afraid that it is hardest, as they say, to choose the harder right over the easier wrong.” Often fear is more intense at the time at the time the person is called upon to demonstrate courage. At the time the belief that there is something more important at stake than what a person might fear or even lose drives the willingness to do what is right,

When is courage demonstrated?
C.S. Lewis’s famous quote is used by just about everyone when courage is discussed. “Courage is not simply one of the virtues, but the form of every virtue at the testing point.” Note one significant word in this quote: test. Courage comes at the time another part of one’s character is tested. In other words, courage never exists in isolation. 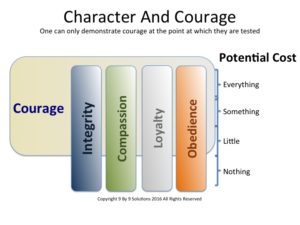 One shows courage when there is a cost to be honest. One shows courage when there is a cost to being compassionate, obedient, or loyal. The cost may be large or small; that is beside the point. A person can only be faithful in the situations he or she confronts.
We may never face the challenge to throw ourselves on a grenade to save others or walk up the stairs of a burning building while other are streaming down those stairs. Those are not the tests that we are called to face. For the firefighters who strode up the stairs of the Twin Towers, they knew those actions could cost them their lives. They went up anyway. The cost you and I face pales in comparison: possibly the anger or disappointment of a boss, employee or even loved one. The point is courage comes into play at the level at which we are tested but this is the point that demonstrates the power of one’s convictions and courage. Being courageous in small things prepares a person for courage in much more costly situations. As Mary Anne Radmacher stated, “Courage doesn’t always roar. Sometimes courage is the little voice at the end of the day that says I’ll try again tomorrow.”
Individuals who compromise the courage of their convictions in small things are seldom courageous in larger and more costly ones.

What is necessary to demonstrate Courage?
Courage does not just happen.

First a person must recognize the situation and understand that an action is required to protect, defend or create something of value. If a person does not recognize the situation courage may be accidental, it will never be deliberate. Second, a person must understand the cost to act. Tis may occur in an instant or over many days as the test of the situation lingers. Again f the person does not recognize there is a cost to act, that act can never be courageous. Finally, the person must choose to act despite the cost. This is the point that C.S. Lewis described – the point at which a virtue is tested and courage steps in to defend that virtue despite the cost of action. As noted above, the cost might be little (embarrassment, humiliation, a reputation of being too straight-laced or by the book) or the cost might be high (loss of job, loss of reputation). 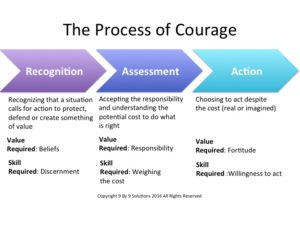 The Hardest Kind of Courage
There are different situations in which courage must be demonstrated. 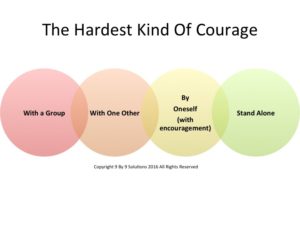 Sometimes a group of people must act together. The fact this is a group provides some comfort and emotional support to sustain the group members through their test. The cost may still be high or low but the presence of a group provides encouragement and support to those who might waver.

A second situation is where the test the person encounters is with one other person. The same conditions apply as with the group except the number of people who face a cost to act is very small. In this case the person may be challenged to questions whether what he or she is being asked to protect or defend is worth it or whether the cost to act is too high.

A third situation is where one person faces a cost for their courage but others who are affected stand by the side and offer encouragement.

The hardest kind of test and most difficult situation is where the person must stand alone when others, maybe even trusted friends or loved ones, advise the person against paying the cost. Many will never be called to face this kind of challenge but when one is called to do so, it tests the person’s character at the highest possible level.

What Is Required To Demonstrate Courage?

As stated above, courage does not act in a vacuum. It flows out of a combination of other character traits. 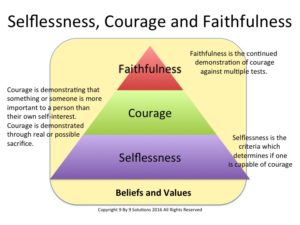 Courage starts with beliefs and values. If there is nothing of value to a person, there is never a reason or time to be courageous. If one holds to situational ethics, the situation can always be rationalized that this is not the time to act or defend a belief and tests can be avoided through compromise. One of the reasons we do not see courage in organization is many leader have never considered their own values, beliefs and convictions.

Finally, repeated acts of courage (even in the small things) build the character trait of faithfulness. Faithfulness is the continued demonstration of courage against multiple tests. This is a person who has demonstrated they can and will carry out their responsibilities no matter the type of test they face.

Interestingly enough, courage is not always appreciated or applauded. 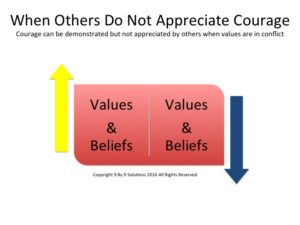 This is especially true when one must stand-alone against others who are advocating compromise or acquiescence. Courage is most often not appreciated when there are not shared values. At that point, courage to stand for one’s beliefs or principles is seen as fanaticism. More and more this is true in our society where values are sharply divided and our country is torn apart at the point of basic values. The point is that courage grows out of values. Each person must decide what their values are on several different levels:
1. Personal
2. Spiritual
3. Societal
4. Organizational

How Do Leaders Demonstrate Invisible Acts of Courage?

Leadership courage is tested around the leaders own personal character and around the leader’s beliefs about people. Leaders demonstrate courage daily through many little things, often unnoticed and invisible as courageous acts; but it is the level at which the leader is being tested.
A few examples of invisible courage are listed below.

Leaders show courage when:
• They chose not to lie to people when to do so would be easier.
• They address problems that arise no matter which staff member is involved.
• They stay true to core values when urged by others to compromise.
• They follow through on their promises when it costs them more to do so than expected.
• They give honest feedback to a staff member to help them grow despite resentment for that feedback.
• They do right by an employee or customer even when it costs the organization some profit.
• They stand up to a superior who is demanding act inappropriately with staff or customers.

What other examples can you add?

So how courageous are you as a leader? Think through the last several times you had the chance to do what was right at a cost or back way from what was right because it was easier on you or it cost less time, effort or money. That will give you an indication of how you will behave when the costs are high and when everyone will look to you for an act of courage.

The Most Important Leadership Skill You Never Thought About

Thought for Contemplation: Great leaders do not think in silos! One wonders how all the high achieving thinkers ended up writing posts about leadership and all the dullards ended up...

When Fairness Rules The Workplace

From a time in the not so distant future The President of the United States announced today that “Total Fairness” has finally been achieved in the workplace. The President credited...