The Focuses Of Servant Leaders: A Caution

What is Servant Leadership?

According to the Greenleaf Center for Servant Leadership, “The servant-leader is servant first… It begins with the natural feeling that one wants to serve, to serve first. Then conscious choice brings one to aspire to lead. That person is sharply different from one who is leader first, perhaps because of the need to assuage an unusual power drive or to acquire material possessions… “The difference manifests itself in the care taken by the servant-first to make sure that other people’s highest priority needs are being served. https://www.greenleaf.org/what-is-servant-leadership/

Where Does Servant Leadership Come From?

Servant leadership does not start with a series of leadership behaviors or practices that can be copied. This approach produces a facade of behaviors that staff quickly realizes are not genuine.

Servant leadership begins from core beliefs. It is an attitude or philosophy that drives the natural and genuine behaviors of a leader. Without this core, attempting to be a servant leader only leads to disappointment and deteriorating trust.

Servant leadership comes from two fundamental, and seemingly contradictory, attitudes. They are selflessness and strength. The combination of these two attitudes forms a third dimension that becomes the heart of servant-leadership.

Selflessness is defined as “having no concern for self; showing great concern for and willingness to give unselfishly to others.” http://www.merriam-webster.com/dictionary/selfless.
Selflessness is putting others first and self last. Needless to say we live in a culture that does not reward selflessness. A psychology of entitlement mentality permeates our society’s thinking so that the majority of people approach a situation to see how they can protect their interests or get more than their share. Situational ethics, the philosophy that indoctrinates students for twelve years of their lives, teaches them to apply values to accomplish their personal goals in the given moment. Genuine selflessness as a result is often looked down upon and even mocked

But selflessness by itself is not sufficient to be servant leader. Strength is required. Servant-leadership does not arise out of weakness. Strength is defined as a legal, logical, or moral force; a strong attribute or inherent asset; a degree of potency of effect or of concentration.
http://www.merriam-webster.com/dictionary/strength

The servant-leader obtains strength from their character and from the position they hold. By virtue of these two items, the leader could demand the rights that belong to them; they could demand others obey and follow them. Instead the servant leader willingly steps aside from what they rightfully could claim.

In essence strength is the power to take action. The reason this is critical for a servant leader is that there must be the willingness, the strength, to step down from one’s position and to “serve others.” A person who is weak in character will not do this.

The greatest example of servant leadership is Jesus Christ of whom it is written, “who, being in the form of God (strength), did not consider it robbery to be equal with God, but made Himself of no reputation (sacrifice), taking the form of a bondservant (selflessness) and being found in the form of a man, he humbled himself (selflessness), and became obedient unto death, even the death of the cross (sacrifice)” Philippians 2:6-8.

Note the equation that is presented: 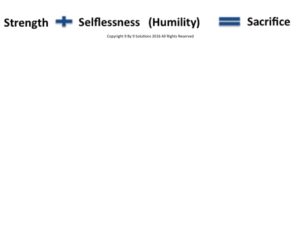 The attribute that allows the servant leader to sacrifice willingly is humility. Humility is not a sense of self-deprecation. It is not a belief that one is not worthy of the position of leadership or that the leader has no power or authority. It is the belief that others’ needs are more important than the leaders’.

A great example of this equation is Abraham Lincoln. Operating out of the power of the presidency, Lincoln selflessly and with humility took the actions to bring together a team of rivals to help achieve the mission. Personal power and reputation were not important. The mission was to unify a nation but to do so by implementing Lincoln’s beliefs in respecting the dignity of all mankind. (The values he was not willing to compromise or sacrifice). Ultimately, Lincoln sacrificed his health, his popularity (in the moment) and eventually his life to achieve the mission that was set before him 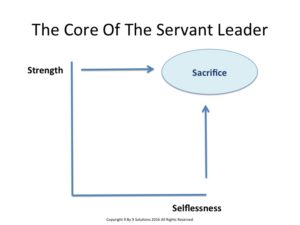 Sacrifice becomes the hallmark of the servant leader. There are many other things that this leader could do with their time and authority that would be much more satisfying and enjoyable. But the servant-leader sacrifices for others.

If servant-leadership is attempted without a sense of values, the leader will serve the group’s whims and desires. In essence the leader becomes obedient to the group and its pleasures. This is what many of our young leaders are being taught today as the group becomes more important than value or principle.

• Mission
A servant-leader assumes a leadership position because there is a mission that is worth accomplishing. There is an end-goal that the servant-leader is moving toward, a direction that dominates their sights. The servant-leader is unwilling to compromise the mission or direction in order to gain followers of popularity. Again this becomes a challenge in today’s “politically correct’ works, where only a group consensus of the mission and values is tolerated. Standing alone for what one believes in is fast becoming a missing skill.

• Trust
A servant-leader guards integrity. This means earning the trust of the group by being honest with them in all transactions. Note, this does not mean the servant-leader has to tell everything they know. There is a fallacy today that transparency means leaders must share everything they know or they are not being honest. Not true. The servant-leader will never lie to or knowingly mislead an individual or group but the servant leader does not, and cannot, always share all information to which they are party.

• Team
Servant-leaders know they are no better than the quality of the team they develop. As a result they protect their team. This may be protection from unjust criticism; it might be correcting the team when it is off course; or it might be defending the team when they are asked to perform outside their capabilities. It might be removing a member who is destructive to the team’s morale and performance. The leader is not leading when they allow the group to ignore issues they must address in order to improve. In essence, the servant-leader defends his or her “flock” by confronting the issues that challenge them.

What Sacrifices Does The Servant Leader Make?
The servant leader primarily sacrifices to ensure the growth of the organization and the growth of followers to achieve the stated mission. The cost of growth in others is high as is the accomplishment of reaching performance goals but it is a cost the servant-leader is willing to make.

There Is A High Cost To Servant-Leadership
Servant-leadership is a high calling but it is also a lonely path. It is a path that can cause leaders discomfort. It is not a style that should be adopted to impress others. It emanates from a personal attitude of building a high achieving team and this requires the leader’s personal sacrifice in order that others may succeed in a mission that is worth accomplishing.

There is a cost to being a servant-leader. That cost is death to self-interests. Most people are unwilling to pay that price but without it, servant-leadership will never be genuine or successful.

So you want to be servant-leader? Count the cost!

The Sloppiness Of Thought Leadership Is Killing Employee Engagement

The quality of leadership is suffering. We see that in all types of organizations and at all levels. One of the many reasons for this deterioration of leadership quality is...

Leadership, Management and People " To manage one must lead. To lead, one must understand the work that he and his people are responsible for." "The greatest waste of management...

Leadership Nugget # 5: Do CEOs See Government As The Main Threat To Business?

Four hundred CEOs in eighty-three countries were surveyed about what they see as key threats to business. There was an amazing degree of consistency on their views. 1. Overregulation -...