The World Economic Forum published the report: The Outlook on the Global Agenda 2015 (http://reports.weforum.org/outlook-global-agenda-2015/) in which is an analysis of the top 10 trends facing the world’s regions over the next 18 months.

One of the interesting findings reported is that 86% of respondents agree that we have a leadership crisis in the world today. Whether this is true or not, it is clearly a consensus view. It is not unexpected; similar findings have been reported previously. The Edelman Trust Barometer reported that the general public’s trust in leaders is far below that of institutions in all 26 markets. Globally, trust in business to do what is right is at 50 percent while trust in business leaders to tell the truth is 18 percent, a 32-point trust gap; the gap between government and government officials is 28 points. (http://www.edelmanberland.com/uncategorized/2013-edelman-trust-barometer-finds-a-crisis-in-leadership/). It is not hard to see that organizations and leadership are in disrepute and the problem is not getting better.

Furthermore, the WEF reports this distrust cuts across all sectors. 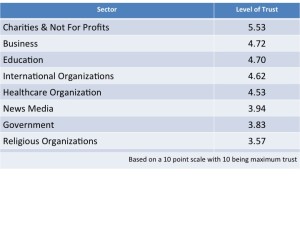 (Does it strike anyone else as shocking that religious organizations, those who should value truth as an absolute, are ranked last? See the issue of lack of character development later in the post.)

Trust in organizations is almost non-existent. No sector received a passing grade, not one even came close. Genuineness, authenticity and integrity are at an all time low. The question is “Why is leadership in such disrepute and why is trust at such an all-time low”? There are several factors that contribute to the deterioration of leadership trust.

First, the term leader is used extremely loosely. (Check the number of thought leaders on LinkedIn. If there are that many thought leaders, why is the same old stuff continually regurgitated?). The imprecise use of terms causes significant problems. For example, people in organizations say things like “I have a problem, I have to select a vendor.” This person does not have a problem; they have a decision to make. The imprecise use of terms either leads the individual to the wrong thinking process that is not suited to the true issue. The same dilemma is true with the terms leader and leadership. Many authorities and companies advocate, “Everyone can be a leader”. This is used to motivate employees; to make them realize how much they are valued and important they are. The problem is it waters down the true definition of leadership. (If you don’t believe this, observe how many organizations send all their employees through leadership training courses. We don’t know who are true leaders are, so we will train everyone as leaders). The truism is when everyone is a leader, no one is. When everyone thinks they are a leader, then the tendency is to criticize actions of those in leadership positions. If a person believes he or she is a leader, the tendency is to evaluate others actions in light of what I would have done (after all, I attended a leadership training course, didn’t I?).

It is simply not true that everyone can be a leader. By definition a leader produces change (progress) over time toward a specific vision. This is the most distinctive characteristic of a true leader – direction, change and movement. Leaders point others outside of the status quo; they stretch people; they move them toward results others never thought were possible. But pointing direction is not all leaders provide. They also create movement and change. They stay ahead of the group and “lead the way”. (And this is where the lack of trust de-rails many leaders. They do not lead the way in their truthfulness). But every direction is not a wise direction. Articulating a positive direction and engaging people to move in that direction is what true leaders do.

Non-leaders may influence others. They share what they think. They may accurately diagnosis a situation. They may even offer the right advice and influence the decisions of others. But influence by itself is not leadership.

Finally, non-leaders can be skilled craftsmen. They can produce excellent and skilled work but being a master craftsman does not make one a leader.

The most common confusion is the distinction between leaders and managers. The difference is best described by comparing what they do. The tasks of leaders and managers are similar and parallel; they do similar work; they must work hand-in-glove. The similarity of the work is one reason we often confuse the two roles and in confusing them, we water down both. The real distinction is not in what is done but how it is done. 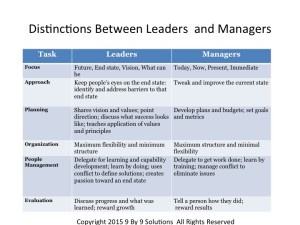 These distinctions can be further illustrated in the following way: 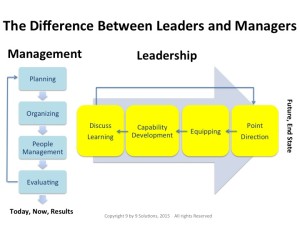 Managers and non-leaders are focused on the present. Their value is in improving today’s results. Do what is expedient today to achieve the current goal. This role is needed and, when done well, is critical to an organization’s success. This does not mean they do not think or innovate; it means these skills are focused around the immediate. Great managers influence people and they provide examples of what professionalism looks like. They keep things in order and in line; they meet deadlines and accomplish results; they make it easier for people to be successful and productive. But management is not leadership. Managers operate in the present and inside the box. They tweak the current. They are concerned with immediate results and efficiency.

Leaders, on the other hand, are change agents; they create movement toward worthy and meaningful goals and as a result live in the world of possibility. Leaders have a restless dissatisfaction with the here and now; they are focused on the future. They cause people to lift their heads and look at the horizon and assess possibilities and potential. (One of the common dilemmas in today’s environment is that in most organizations, “leadership” positions call for people to be both leaders and managers. This means that managers have to learn how to lead or leaders have to learn how to manage; capabilities not generally found within their skill set. (And therein lies one of the core leadership problems). See https://www.linkedin.com/pulse/20140624200145-43121478-dancing-on-the-head-of-a-pin-implications-of-the-leader-manager-debate?trk=mp-reader-card).

There is a second reason why true leaders are rare. Leaders grow from great character development. The dilemma is that in our society character development is declining. Our families, churches and schools are failing us. Values are viewed as situational. They are to be followed when they are personally beneficial but are to be discarded when they get in our way. Years of this philosophy are taking a toll on leadership. One only has to look at recent events for examples of lack of character. Lying is common. Whether for enhanced reputation or financial gain, truth and integrity are viewed as situational niceties, not absolutes. Brian Williams, Hillary Clinton, Robert McDonald (the VA head claiming he served in Special Forces) and a host of others provide current examples that integrity is considered situational. Integrity is valued only if it fits a personal agenda or if it is a standard that can be conveniently applied to others (to make oneself look better?). Lying is becoming more common and as it does the distrust in leaders continues to decline. As James, the brother of Jesus wrote, “but let your yea be yea; and your nay, nay; lest ye fall into condemnation” (James 5:12). Today leaders increasingly fall into condemnation for failing to heed this basic admonition.

There is a third reason for the decline of true leaders. There are no leaders without followers. The lack of character development creates a second impact on the leadership crisis. Not only does lack of character development mean that genuine leaders are not being formed but it also means that followers no longer value character and integrity when true leaders demonstrate it. This creates two leadership dilemmas:

Is there a solution?

Unfortunately from society’s point of view, there are no immediate or easy solutions. Our institutions are failing us (or maybe giving us what we truly want but will not admit). As a result, leadership is slowly sliding toward the lowest common denominator. Societal failures (i.e., make up for the low quality produced by the education system; create meaning in work so that staff have something to live for; teach values and character not taught in families, churches or schools) are being placed on the doorstep of organizations to resolve. Productivity and profit are no longer the major foci of business; creating meaningful, challenging work within a healthy culture is the new expectation.

So what is the organization to do? There are several questions that must be asked and answered:

Copyright 9 By 9 Solutions 2015  All Rights Reserved

Flat, Self-Managed and Fun: Are We Positioning Organizations For Mediocrity?

This article was originally posted on LinkedIn on June 30, 2014 More is expected from the workplace than ever before. Companies are asked to develop foundational skills (compensate for the...