“Leaders who rated themselves on the low end of 360-degree surveys received higher leadership effectiveness scores from their employees and colleagues. Indeed, the more they underrated themselves, the more highly they were perceived as leaders We assume this is caused by a combination of humility, high personal standards, and a continual striving to be better.
Survey of 69,000 managers by Jack Zenger and Joseph Folkman on HBR.org 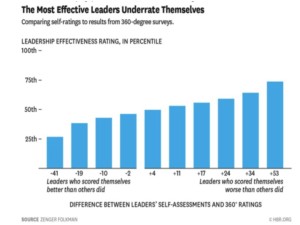 Leadership Lesson: Why is humility a distinctive characteristic of many effective leaders? The primary reason is that it stems from a core attitude that recognizes that one’s achievements in life are attributable to the hard work and contributions of many others.

The attitude of humility is reflected in the famous leadership quote by Lao Tzu, “A leader is best when people barely know he exists, when his work is done, his aim fulfilled, they will say: we did it ourselves”.

There are six important characteristics of leadership humility.
1. Humility is not a depreciation of one’s self-worth. It is not viewing oneself as unnecessary or unworthy to be in the position. It is not a reluctance to make contributions because one’s ideas or opinions are not as good as others.
2. Humility stems from possessing a broad perspective of the contributions necessary to achieve results. It is the realization that nothing could have been accomplished without others.
a. The core of humility is putting one’s own contributions in perspective with what others have contributed.
3. Humility is not weakness or shyness. Humble leaders demonstrate strength through the courage to identify issues that must be addressed and then bringing together the right people to work on those tasks. Humble leaders show strength by making contributions that only they can make (direction, support, resources or simply the approval to work on a task). They also display strength by getting out of the way so others can make their contributions.
4. Humility requires high standards. As Zenger and Folman point out, one of the reason humble leaders rates themselves lower is because their standards are high, especially around what they expect of themselves.
5. Humility does not mean secrecy, failure to be honest, or avoiding conflict. Rather the leader’s humility creates the foundation for an open culture that allows others to contribute.
a. Humble leaders recognize they do not have all the answers and therefore, to achieve optimal solutions, others must be involved. As a result, the humble leader is not afraid to engage and listen to others.
b. Humble leaders recognize people need true data to perform at maximum efficiency. Humble leaders have the strength to provide others honest feedback, not to put them down and elevate self, but to make others better.
c. Finally, humble leaders delight in their people and teams being recognized for their successes.
6. Humility is the core attitude beneath the willingness to learn from others. Zenger and Folkman point out that the humble leader is constantly striving to be better. This desire for improvement is for the team, the people, but most importantly for the leader. Humility breeds the attitude that he or she is not yet the leader they need to become. This attitude creates a learning environment that sends a clear message that everyone should learn from each other.

The essence of true leadership humility is described in Philippians 2:3, “Do nothing from rivalry or conceit, but in humility count others more significant than yourselves.” Note two critical points.
1. Lack of humility can arise from rivalry where the leader is in competition with staff for who receives credit.
2. One is not to think poorly of him or herself. Rather humility comes from thinking more highly of others.
As the genuineness of this attitude becomes clear to people, there is an attraction and response by people to not only follow but to contribute.

A final note: The opposite of humility is arrogance. Arrogant leaders overrate their contributions, their ideas, and their overall worth. When staff sees this superior attitude it ultimately leads to staff resentment. As a result, staff and leadership begin to compete for recognition and credit of contribution and value. Arrogance has destroyed more leaders than any other facet but possibly one. The only one thing worse than the arrogant leader is the leader who fakes humility.

Mindfulness For The Christian Leader: It’s Not What You Think!

Warning! It Is not my intent to make anyone mad. If you are not a Bible believing Christian, do not read further. It will only make you mad. If you...

30% of American Leaders Are Considered Great. How Do You Know If You Are?

Few Great Leaders In a 2013 research study Gallup made an interesting observation about American leadership. They reported that in America approximately 100 million people hold full-time jobs. To lead...